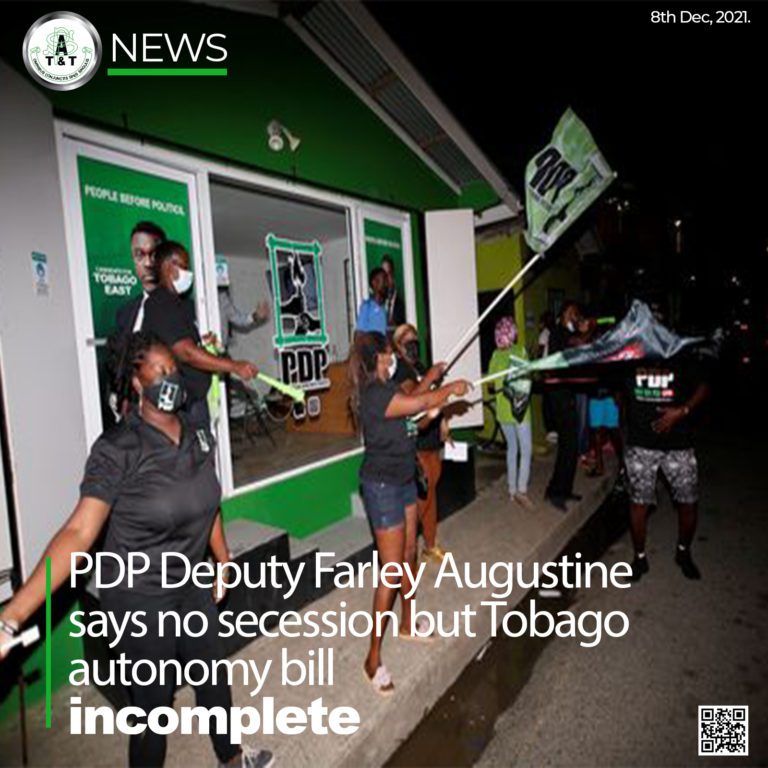 The EBC said it has received official requests for recounts in the electoral districts of Buccoo/Mt Pleasant and Darrel Spring/Whim.

During a TTT interview on Tuesday, the fatigued soon to be Chief Secretary said that a false narrative has been created around his party’s take on secession and autonomy.

He noted that the autonomy bill is incomplete and still does not allow Tobago to run its own functions outside of social and economic development as something as simple as a marine park cannot be determined by Tobago.

“The autonomy bill that was proposed by the PNM and the Prime Minister is incomplete which means that there is more that should be added to it,” he added.

Mr. Augustine reminded the public that the cabinet asked for amendments to be sent. This he said was done but they are yet to hear anything from Parliament.

“The autonomy bills are incomplete and we need to complete it. Not for an independent or seceded Tobago but for a more autonomous in Tobago,” he said while drawing reference to autonomous relations in the UK and even St. Kitts and Nevis.

PNM candidates and even Prime Minister Dr. Keith Rowley warned Tobagonians that the PDP is seeking independence from Trinidad which he said could be detrimental for the island. Mr. Augustine denied these claims.

He went on to list some issues which should be addressed in the autonomy bills such as state lands being controlled by the Ministry of Housing in Trinidad and even Town and Country Planning. He said the bill must clearly state what belongs to Tobago, including bodies of water.

“Tobagonians have been very clear that there is no adequate autonomy bill if it’s not clearly defined in that bill who or what belongs to Tobago…it must be very clear what are the physical perimeters over which THA would be able to pass those laws.”

When asked about his team and even the party’s leader Watson Duke and his role and function, Mr. Augustine said that him being Chief Secretary will depend on the team’s vote and not Mr. Duke alone.

He further explained that Duke now has a choice to make as he is currently the President of the Public Service Association. This being that certain laws will prohibit his functions as the political leader of the PDP or a member of the executive, but he made it clear that Duke is critical to the party and its success.

The Progressive Democratic Patriots are expected to be sworn into the Tobago House of Assembly on Thursday.