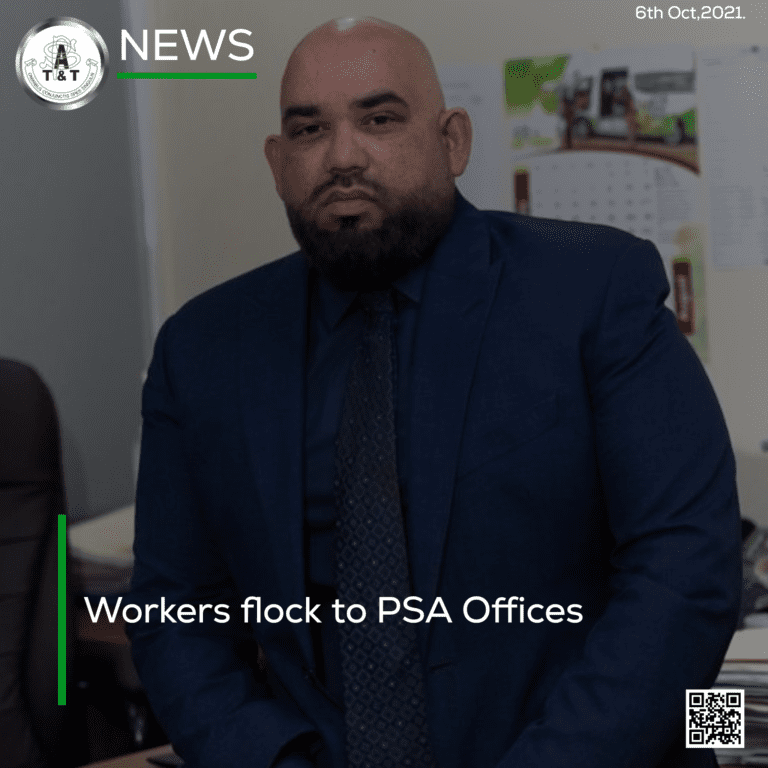 More and more employees are visiting the offices of the Public Services Association(PSA) since companies began implementing discriminatory vaccination policies at the workplace. That is, according, to the second vice-president Avinash Maharahj, who said that the majority of cases are coming from private companies and those that do not have union representation.

While Digicel Group and LJ Williams were just two companies that headlined in the news last week, Maharajh noted that there were more. However, he stated that the PSA thus far has had a 100 percent success rate in changing the policy at these organisations.

Maharahj said, “In many private enterprises where there are no unions present, the workers are really taken advantage of because there is no one to stand up for them. Noone to defend their rights as workers. They are looked at as factors of production rather than individuals who have lives outside of work. Unionized environments generally have better wages, enhanced terms and conditions, and benefits such as medical insurance and pension. Unionized environments also allow workers to have a say in their terms and conditions of employment.”

He continued: “Private companies with no unions present exploit workers and pay no attention to the industrial court because they believe that workers are ignorant of their rights and have no one to defend them. This is why unions are important to society. Unions defend the working class against exploitation from the business class whose primary objective is profit maximization for shareholders.

Using the USA as an example, the second vice-president said unions have been decimated in that country due to the culture of capitalism and pointed out that the effects can be seen in the level of inequality that exists in that society.

When asked specifically about the vaccination policy currently being forced on workers, Maharajh said: “Mandatory vaccination and PCR testing is illegal and unsustainable. All unions have indicated this. The industrial court president has indicated this and the former head of the Equal Opportunities commission Lynette Seebaran-Suite concurs that this is not the law and cannot be enforced on workers.” However, Maharajh believes that private companies are pursuing mandatory vaccination despite the pronouncements because they believe they are being forced by the government to do just that. He pointed out the proclaimed “safe zones” as one of these inferences since it is a zone designed by the government where both workers and patrons must be vaccinated.

However, Maharajh reasoned that all workers faced with the dilemma should visit the PSA office and reminded that President, Watson Duke had made several Facebook live videos condemning the mandatory vaccination policies that many organisations were adopting. In addition, he ended the interview by saying, “The PSA has revamped its website and it is now the best trade union website in the Western Hemisphere in terms of news. The website allows workers to join the PSA and allows workers to file a grievance online.” He added: “There is also a knowledge base with industrial relations advice and information links to regulations and terms and conditions of workers. There is also a pension calculator and in-depth information on pensions.”

He said workers are encouraged to join the PSA using the online platform and file their grievances online at www.psatrinbagott.org