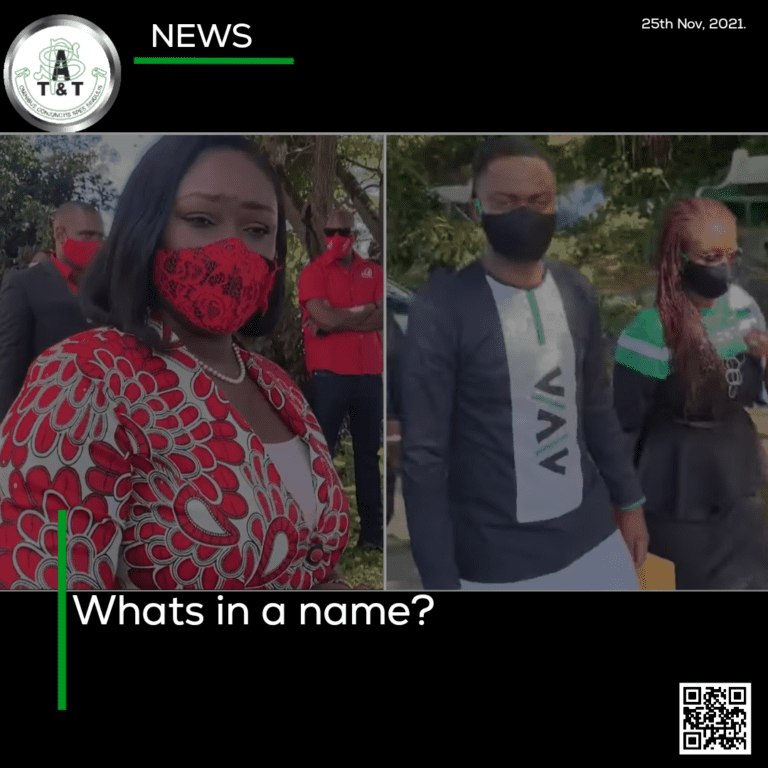 Those were just some adjectives that social media critics went abuzz in describing the leader of the PNM Tobago council as she contended for her party’s position in the upcoming Tobago House of Assembly(THA) elections.

The barrage of comments came after Tracy Davidson-Celestine, in a recent PNM virtual campaign meeting tried to paint a picture that likened the Progressive Democratic Patriots(PDP) deputy political leader, Farley Chavez Augustine as a man with a historically nefarious name.

The candidate who is vying to represent the people of Signal Hill/Patience Hill with a smile on her face said: “I want all of you to take note of the name Farley Chavez Augustine. Put aside Farley, put aside the Augustine and pay attention to that name Chavez. Look it up. Go back in history and you will see the kind of people with the kind of characteristics who were named Chavez. And we have one of them right here in Tobago.”

In the comment section of a post made by journalist Liz Williams, some commenters were not impressed with Davidson-Celestine comparison. One woman, Kennisha Henry noted: “This is the most desperate I’ve ever seen the PNM. Poor lady, don’t know what to speak on anymore.”

Following behind that comment, Kadesha Woods-Benjamin added: “She for real, why y’all feel so threatened by this young man.”

Another man noted that he looked up the name Chavez on the internet and saw Cesar Chavez, “Born near Yuma, Arizona, on March 31, 1927, Cesar Chavez employed nonviolent means to bring attention to the plight of farmworkers and formed both the National Farm Workers Association, which later became United Farm Workers. As a labor leader, Chavez led marches, called for boycotts, and went on several hunger strikes.” The man noted that the PNM candidate needed to explain herself better or at least say what she really wanted to say.

At a political meeting that the PDP held last night, Deputy political leader, Farley Chavez Augustine addressed the notion that his name should be associated with anything negative and pointed out that his political opponent needed a lesson in history or even some schooling on using the internet as a resourceful tool.

According to Chavez, his name was gotten from a fighter. He said: “My name is Farley Chavez Augustine and I am proud of the name my mother gave to me. In fact on the 19th, April 1985 an unmarried woman, six months pregnant looking at her parents old black and white Zenith television saw a boxing match between one Julio Cesare Chavez and Rueben Castillo, and that night she felt inspired to adopt as a name for the child to come, Chavez. In fact, she said to me before she passed that she did not know if the child was boy or girl but she knew that the child she wanted to bring forth in this world must have that fighter spirit as Julio Cesare Chavez.”

The PDP second in command then when on to state that after his mother had told him the history he had researched the fighter and realized: “There was something unique about this Mexican, Chavez, fighting in America against a famed American boxer. This Chavez understood how to apply crazy pressure. This Chavez understood what it meant to have stamina. This Chavez fought in this fight and by the end of the night, Rueben Castillo, the challenger ended up with two broken ribs, a broken jaw, 15 stitches on his left eye.”Addressing the audience Chavez Augustine gave the assurance that when voters are told that they should focus on him then let them know they are focusing on a man who will fight and apply crazy pressure for Tobago’s plights.

Chavez Augustine also noted that his name meant “keys” in Portuguese and drew a comparison of his own, saying: “If she understood what that meant she would know that the keys to reopening Tobago to the people of Tobago are in the hands of this Chavez Augustine.”

He ended by ridiculing the leader of the PNM Tobago council by pointing out that there was a huge age difference between the Hugo Chavez she was alluding to and himself since he was born long before the Venezuelan leader walked onto the political scene in 1999 and therefore could not have been the Chavez name who he had walked into.

The Venezuelan leader, Hugo Chavez ruled his country between 1999 until he died in 2013. According to a 2013 BBC news article entitled: “Venezuela to investigate Chavez murder allegations,” it stated “Venezuelan officials have said they will set up an inquiry to investigate suspicions that President Hugo Chavez was murdered by foreign agencies. Oil Minister Rafael Ramirez told the BBC the United States and Israel were to blame for Mr Chavez’s death. He said he hoped the special commission would provide evidence. Mr Chavez himself suggested he might have been injected by “foreign imperialist forces” after discovering he had cancer in 2011.”