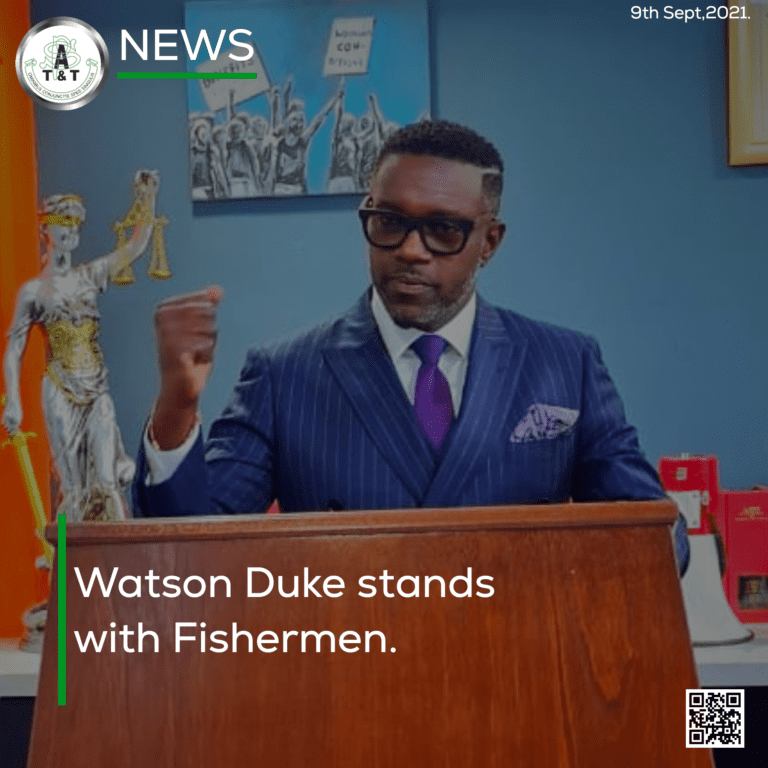 Leader of the Progressive Democratic Patriots, Watson Duke has taken up the plight of fishermen in Tobago.

The PDP leader was doing a Facebook live whilst visiting a fishing bay in an area called Courland Bay in Plymouth, Tobago

Visible in the Facebook live was a broken-down jetty that was projecting into the sea.

The fishermen informed Duke that the jetty had been in a state of neglect for more than a decade, but told the PDP political leader that the broken point had occurred about eight to ten years ago.

Walking closer to the shoreline, Duke informed viewers of the hazards that fishermen face daily to access their boats out at sea.

At the time of the Facebook Live, he counted 15 boats close to the jetty and informed viewers: “I have been told there are 15 more boats out at sea. These fishermen depend on fishing for their trade. That jetty use to be the only means for these fishermen to properly access their boats and under the Peoples National Movement, under the red jersey team, this collapsed and they never ever fixed it.”

He also pointed out that the Courland bay jetty was not the only jetty in Tobago that had collapsed and was neglected under the PNM. However, he insisted that the message was to fix the one at Courland bay today.

Standing on a platform near the water’s edge, and pointing to the boats out at sea, Duke also indicated to viewers on the broadcast, the distance that fishermen had to swim to access their boats. He, however, made the point that using the jetty would have been much easier for fishermen.

In addition, he further highlighted the entrance that the fishermen had to take to reach out to the sea. An entrance that is joined to a large bank overlooking the platform that he was standing on, Duke said, “The entrance here is rough. They must contend with these rocks. This here is falling away. That bank, could that bank fall and kill them one day?”

While speaking to the fishermen and acknowledging the mess that the PNM had left them in, the leader of the PDP informed them that their problem would be solved within four years of the PDP’s term in office.

In July Prime Minister, Dr. Keith Rowley announced that Tobago will return to the polls to break the six-six Tobago House of Assembly(THA) deadlock that both the PNM and the PDP had contested on January 25.