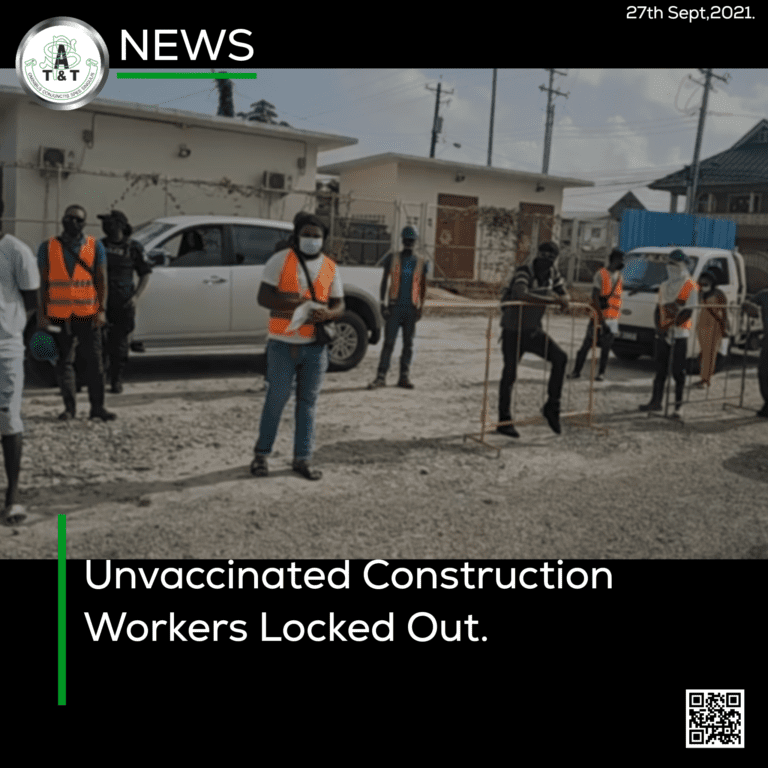 On the 16th of September construction workers at the Sangre Grande hospital were locked out until they could show proof of vaccination, due to this the workers have been protesting the unjust treatment. Head of the First Wave Movement, Umar Abdullah, was there on the scene of the protest showing support to the Junior Sammy workers.

He went on to state that what the company was doing was a crime as it is coercion against the employees. Abdullah said, “It is oppression on top of oppression and that is not going to happen in a democracy as far as I am concerned democracy in this country has been canceled every move that this government has been making has been anti-democracy.”

Abdullah stated that he had a document for The Urban Development Cooperation of Trinidad and Tobago Limited (UDeCOTT) to sign which stated that they would take responsibility if any vaccinated worker receives any side effects from taking the vaccine.
UDeCOTT is a private company that is wholly owned by the government of the Republic of Trinidad and Tobago and is responsible for the Corporation Sole- The Minister of Finance.

According to the workers, they had been working at the site since the beginning of the pandemic, and not one person on their crew had gotten covid-19, but now they are locked out and an entire crew was sent home without pay. They further stated that they were told that they had to take the vaccine to work.

During the demonstration, new workers were bought in by Junior Sammy to continue the job and it is alleged that all necessary protocols were bypassed. Junior Sammy is the sub-contractor while Vamed Engineering, an Austrian firm is the main Contractor.

On a call with PSA Media activist Abdullah stated that since the protest workers have received their pay, however, UDeCOTT has not stated their position in regards to workers getting the injection and entering the construction site. “We are not going to stop until UDeCOTT reverses their decision,” said Abdullah as the situation is persisting.