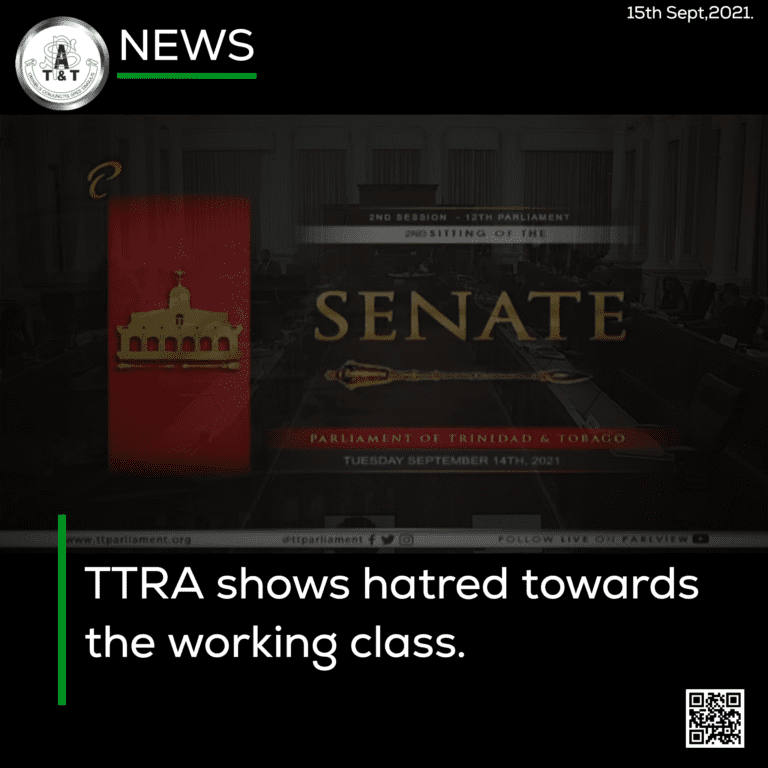 According to Senator Wade Mark, The Revenue Authority (TTRA) Bill shows hatred towards the working class, towards workers, and the Trade Union Movement. Since 1962 The Public Services Association (PSA) has represented the civil servants in The Board of Inland Revenue, Customs and Excise Department and more recently The Vat Office.

In the new bill, however, there is no provision for successorship. Successorship is a clause that all unions have, it allows for unions to be recognized by new employers so that they can bargain with the union representing the employees if the employer keeps the business largely unchanged or hires the majority of the predecessor’s employees of its post-closing workforce.

Senator Mark stated that the government intends to decimate the PSA and The National Union of Government and Federated Workers (NUGFW), saying “ They have cut off completely and removed The Public Services Association and the NUGFW from representing those workers that they have been representing.”

In a Zoom meeting the day before the debate PSA President, Watson Duke, told workers from The Board of Inland Revenue and Customs and Excise Division that the bill will be challenged in the courts if the bill is passed into law. The President said, “We will not spare one single cent to have that law deemed null and void and no effect.”

He continued stating that the government has been wrong many times and that he is certain they are wrong this time as well, that when it comes to The Revenue Authority we are fighting for our jobs, for our children, and that we are fighting for the constitution of Trinidad and Tobago that speaks of social justice and the right of every single citizen to have employment.

The Government in the debate offered four alternatives to public service workers in The Board of Inland Revenue and Customs and Excise Division. The four options given for the employees to choose from are to retire, work with the Revenue Authority, work with the enforcement arm or remain in the public service.

If the bill is passed 2,175 workers will have to make their decision but all of these workers will be affected.