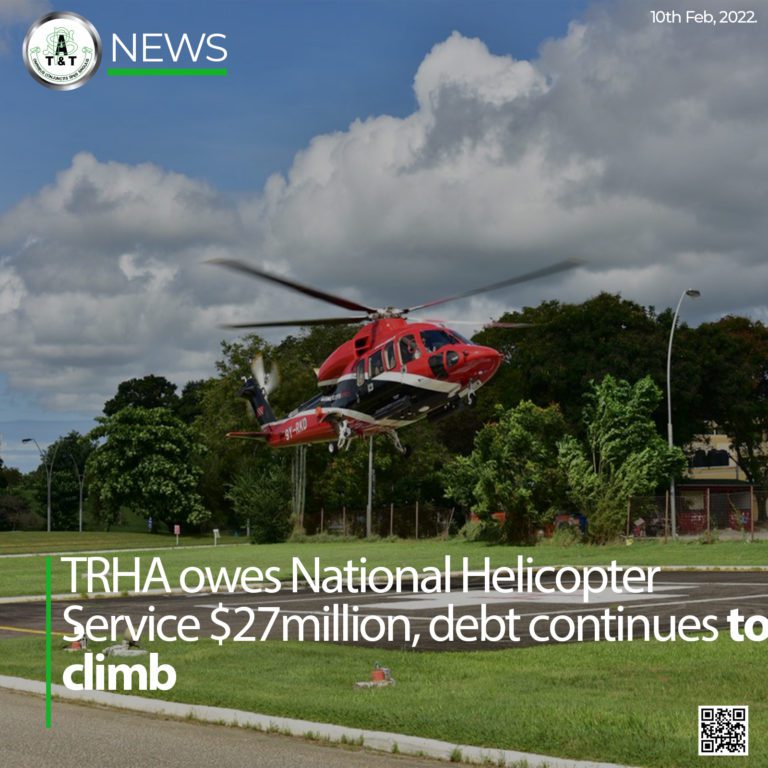 As of January 31st, 2022, the Tobago Regional Health Authority (TRHA) has a liability of $27 million to the National Helicopter Service and proposes to clear this debt in just six months.

This may immediately spark the question of how, so Chief Administrator at the Tobago House of Assembly Mrs. Bernadette Solomon- Koroma said they will somehow locate at least $4 million per month.

“By the quarterly allocations we receive, whether or not we are receiving it monthly, we will just have to find the money, move it around and allocate the funding to pay off that debt,” she explained at Wednesday’s Public Accounts Committee meeting on an examination into the internal controls, expenditure and the accessibility and availability of diagnostic imaging services at the TRHA.

Having already received allocations for fiscal 2022, Administrator at the THA Shelly Trim explained that in October 2021 additional funding was made to the THA. However, that is not the only debt incurred. She said, “ An additional $4 million has been made available to the TRHA since October 2021 and they have been distributing that to clear down other debts.”

According to her, some of the debt has been paid off but a $115,000 debt is incurred every time the service is used and has been incurring since 2019. “ So it’s a recurring debt. It is difficult to pay off entirely. However, I have reached out to the Division of Finance and Economies so that we can look forward to re-prioritizing and making additional funding available to the TRHA.”

In 2021, the Standing Finance Committee approved an $80 million supplementation for the Tobago House of Assembly. Finance Minister Colm Imbert said $50 million of this funding was for recurrent expenditure, and $30 million was for Tobago’s public sector investment program. Minister Imbert also said this money also concerned settling debts owed by the THA to the national ambulance service and the national helicopter service.

Medical Chief of Staff at the Scarborough General Hospital Dr. Victor Wheeler then sought to clarify the use of the national helicopter service by the RHA. He said that with a population of 60,000, it is impossible to provide all the possible care at the RHA. As such, patients are flown to Trinidad by helicopter.

Dr. Wheeler added, “ If there’s a service that Tobago doesn’t offer and that service is offered in Trinidad, we transport that person to Trinidad essentially to ensure that patients who come for care at the TRHA facilities are provided the best care possible with the facilities we have and what we don’t have we certainly ensure that we take them to Trinidad where it can be provided.”