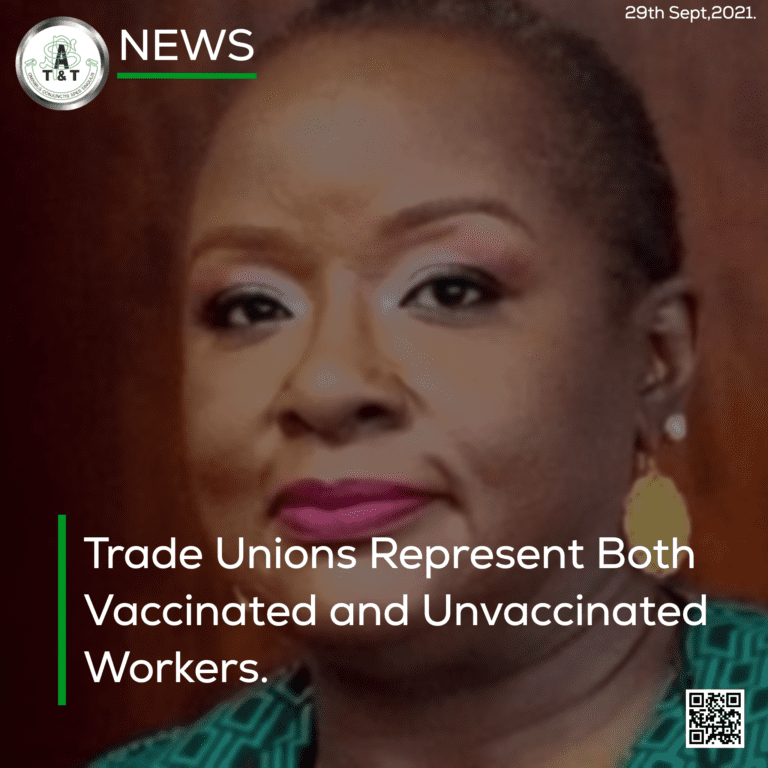 Trade Unions represent the vaccinated and the unvaccinated and therefore have a moral and legal responsibility to look after the interest of both groups. According to the General Secretary of the National Trade Union Centre(NATUC), this was the position that was made clear at yesterday’s stakeholders’ meeting, which was called by Planning and Development Minister, Camille Robinson-Regis.

Furthermore, General Secretary, Michael Annisette said: “NATUC does not share a view that divides the society. In that, you divide people into what you want to call vaccinated people and unvaccinated people.” He said it is not good for our society. It is not our culture.

He continued: “We have to be careful of imposing rather than persuading people.” Annisette pointed out that the trade unions also made it clear that they are not against vaccination but believed it is a personal choice that persons must make. He went on to say that another point that was being overlooked and they had to make clear was the effectiveness of deep-cleaning and sanitisation that was taking place at the workplace. He said: “Prior to the vaccination roll-out there were essential industries and essential workers, some who were deemed frontline and they were working throughout the pandemic and were functioning very well in most places.”

A news release sent out by the Planning and Development Minister yesterday said, “The primary intention of this meeting is to engage representative stakeholder groups in dialogue to discover collaborative methods of directly tackling vaccine hesitancy and finding common ground for public safety, especially in Trinidad and Tobago’s workforce.

However, NATUC’s General Secretary stated in a conversation with PSA media: “Given the dynamic of the pandemic such a meeting should have happened long before.” He said NATUC had written to the health minister last year asking for the minister to meet with the trade unions including NATUC. He said, “The issue of the pandemic is not only a health issue. It is an issue that involves the economy and social fall-outs. It is an issue that involves people. So therefore just treating it as a health issue is to go down the wrong road.” He however noted that speaking about a vaccination policy in the workplace now is better late than never and said that what was encouraging at the meeting was that though different views were being expressed persons were discussing risk analysis.

Other stakeholders that were present at yesterday’s meeting were the other umbrella trade union organisations, the Federation of Independent Trade Unions and NGOs(FITUN), and the Joint Trade Union Movement(JTUM). Also present were some umbrella business organisations such as The Trinidad and Tobago Manufacturers Association(TTMA) and the American Chamber of Commerce of T&T.

According to Annisette, Planning and Development Minister, Camille Robinson-Regis did indicate that there would be a follow-up meeting in the future.