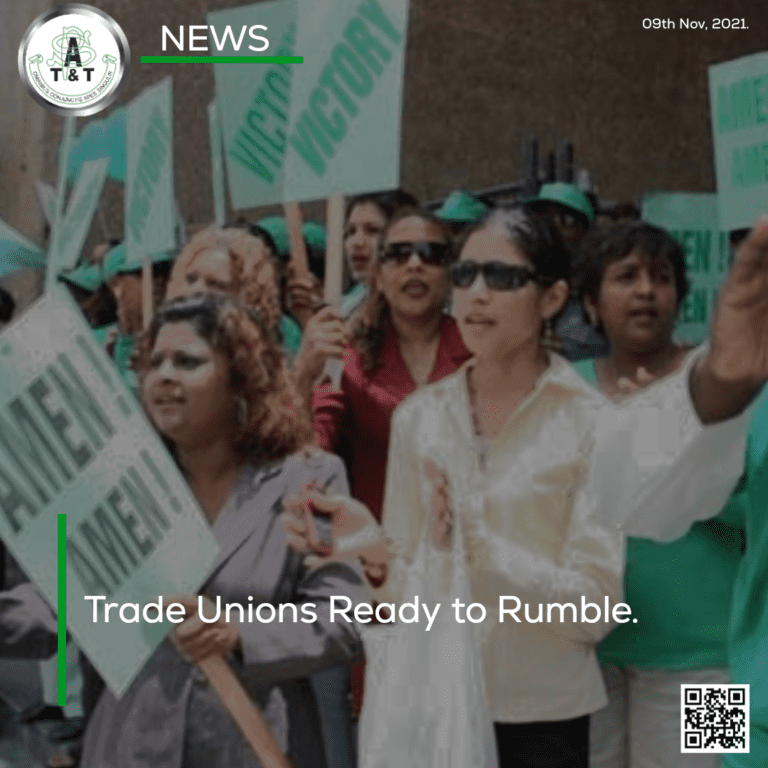 At least two trade union movements have already indicated their intent to mobilise troops to fight for the rights of their membership when the current state of emergency(SoE) ends on November 30.

Speaking to PSA media yesterday 2nd Vice-President of the Public Services Association(PSA), Avinash Maharahj said: “At the end of this SoE, there will be a window of opportunity that the PSA as a union is geared to capitalise on and mobilise our members in unison with our comrades in the trade union movement to fight against the many ills we currently face, particularly that of long outstanding wage negotiations. We encourage our members to stay alert and be on the ready, come the end of November and with the end of the SoE.”

According to Maharahj, the SOE was used as a mechanism of control. He stated, “Not of the virus, but of people who were opposed to the ills perpetrated by this government.” He contended that it was designed to restrict persons from expressing their discontent. “The numbers have been on an incline with the spread of the delta variant and this despite the SOE.”

“We have always maintained that the SoE must come to an end at some point and when it does come to an end, we will do what we do best in terms of mobilising the mass movement to respond to government’s neo-liberal economic policies.”

Asked what were some of those neo-liberal policies Warwick stated: “The liberalising and privatisation of fuel distribution, complete removal of subsidies and market driven prices of utilities.”

He also noted: “We were of the very firm view that the SoE was an attempt to curtail mass action. The government used the cover of the SoE to implement their neo-liberal policies that are inimical to the interest of the people of Trinidad and Tobago and with the SoE in place prevented the mass response to those neo-liberal policies.”

However, 2nd Vice-President of the Trinidad and Tobago Registered Nurses Association(TTRNA), Letitia Cox indicated to PSA media that the TTRNA was not held back by the state of emergency or the lockdown. “Throughout the pandemic, we found innovative ways to raise the issues facing our membership.”

She noted that the various arms of the media were used efficiently by the TTRNA. She also pointed out the success of the October 1 initiative. “That day of prayer entitled “Blackout”. The government actually acknowledged that the nurses were at a disadvantage in their budget statement. In terms of the temporary and short-term contracts that they were hoping to treat with it by December 31. So, it is not that we stopped or we discontinued our industrial relations activities it was throughout the pandemic we were doing things to highlight our issues.”

However, Cox admitted that part of the reason that it was easier for their association to vocalize their perspectives was because of their “essential workers’” status during the pandemic.

On the issue of the effectiveness of the state of emergency(SoE) the TTRNA 2nd Vice President made the point that the SoE had already served its purpose to teach the population personal responsibility.

“We welcome the end of the SoE. We believe in the first instance the government may have used the SoE to give them time to roll out the vaccination plan. To see how many persons, they would have got on to the vaccination drive. As it stands right now, I believe there is a substantial number of persons vaccinated although the government is stating they want to see more persons vaccinated. But presently we are at a stage of personal responsibility.” She noted that while she was fully vaccinated both herself and the organisation she represented was also pro-choice.

General Secretary of the National Trade Union Centre(NATUC), Michael Annisette when contacted said that from the perspective of NATUC: “There was a lot of anger and disaffection and distrust among the workers who we represent over what was happening during the period of the state of emergency and even before the state of emergency.” He noted that there are outstanding wage negotiations at some establishments that goes back as far as 2007 and those needed to be addressed. He pointed out that it was imperative that the government meet with the unions since a lot of the neglected workers are government employees.

In his reaction to the effectiveness of the SoE that is set to end on November 30, the PSA 2nd Vice President, Avinash Maharahj ended by saying despite the assertions made by the Prime Minister, Dr. Keith Rowley, the government could not have prolonged another SoE unless they had the three-fifths majority as required by the constitution. However, he warned: “This dictatorial government no doubt would have extended it if they had the numbers in parliament. Who knows, maybe in a few weeks they may implement another SoE which will not be uncharacteristic of this administration.”