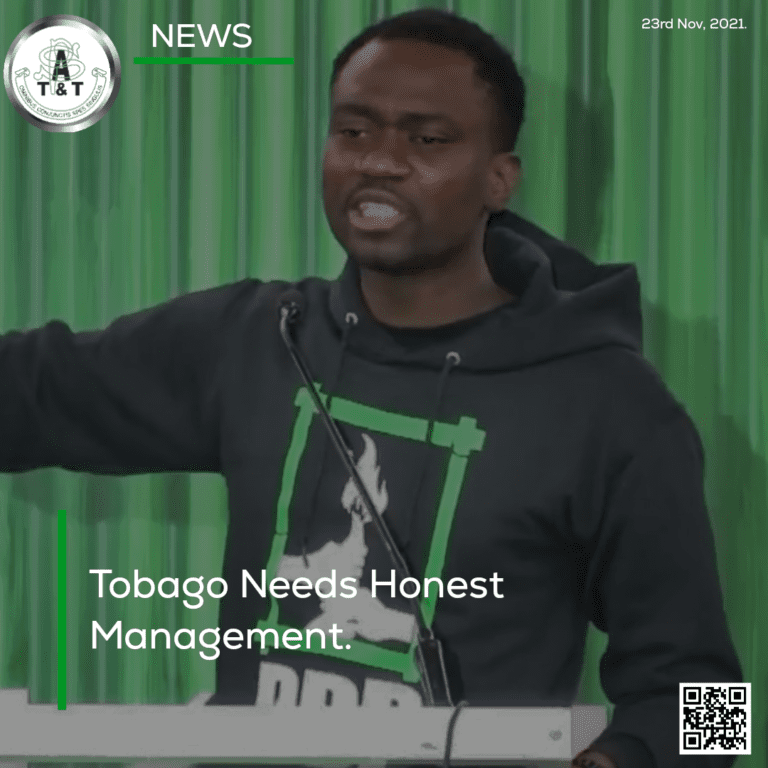 Tobago needs honest management with resources and someone with the political will to drive the community of Tobago in another direction. These were the sentiments stated by Progressive Democratic Patriots (PDP) deputy leader Farley Augustine.

Augustine at a political meeting in Bethesda/Les Coteaux stated that the PDP campaign was all about fixing Tobago and getting it the honest management it needed, he went on to state that over the next two weeks the PDP would share the revelation of their complete mandate.

The area representative of Parlatuvier/L’Anse Fourmi/Speyside chose to focus on the PDP’s plans for fisheries. “I think that the Tobagoians deserve to know the plans of every candidate for their area,” “That’s why I have been insisting that when area reps come here they come here and present their plans for their respective districts,” said Augustine.

He went on to state that one of the things that needed to be looked at was the management of the fish stock in Tobago. Another point brought forward was the protection of the fish stock and the indication that the PDP would provide proper jetties, proper indoor and outdoor facilities, necessary security for fishing communities in designated areas, proper lighting, access to ice,the exploration of the possibility of fish farming, proper slipways at major fishing venues and the securement of fishermen.

“We talking about the protection of our fisherfolk it is far too frequent that fishermen will wake me up in the middle of the night because someone of their colleagues is lost at sea we can’t find them our fishermen will come in and complain, the boat broke down, the engine broke down and we calling coast guard and the coast guard say we have no fuel, we have no boat the boat in Trinidad, the boat break down all kinds of excuses to help rescue our fisherfolk and some of our fisherfolk do some good miles going out to sea some going all the way out to where the oil rigs are in sauna in our waters by the way, Tobago waters by the way going out to fish and we have to find ways to protect them if the coast guard wouldn’t do then the THA must step in and do it ,” said Augustine.

He stated that the PDP was giving the commitment to step in and protect the fishermen through the use of GPS locators, access to flares and satellite radio.

The satellite radios are a bit expensive but we will look into subsidising the cost of the radio for our fisherfolk, stated Augustine.

“We will ensure that every single one of them when they are leaving, they have adequate life vestsand that they are abiding by the laws when it comes to protecting themselves out at sea.””, he said.”

Augustine further went on to state that fisherfolk needed to be protected as it was an important industry to Tobago.

“We are going to ensure that when we are discussing the autonomy issue again that Tobago waters must be part of the package, must be part of the package because we have to be in a position to manage and treat with our environment, our waters, our sources there in protected while using in a sustainable way and determine how we monetize them and the way to that is to take control through the legislature,” said Augustine in his closing statement.

The THA elections are due to be held on the 6th of December after an unprecedented tie between the PDP and the PNM.