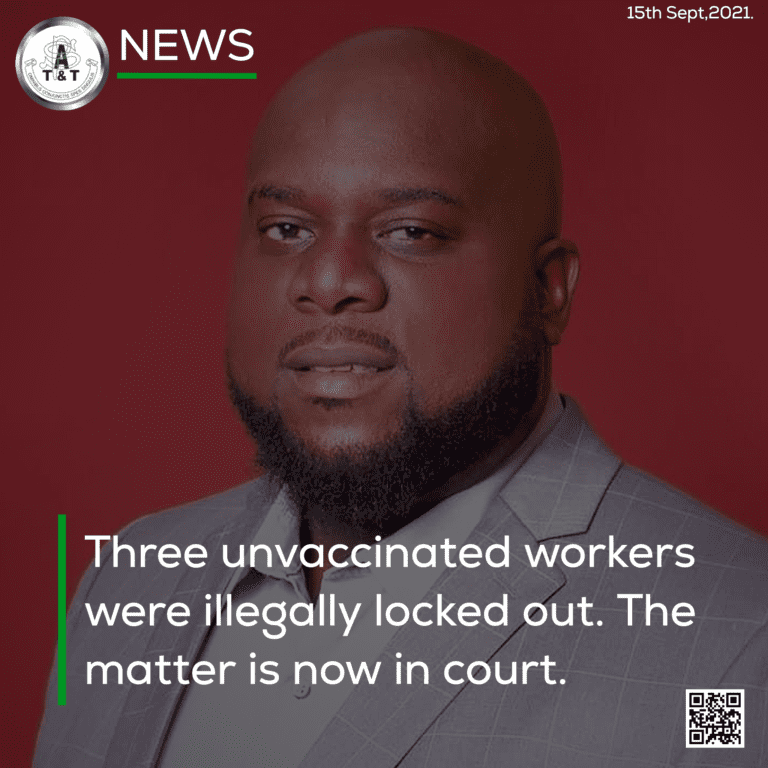 Three unvaccinated workers employed at the Desalination Company of Trinidad and Tobago (Desalcott) have been denied entry at their workplace. The workers, following their employer’s mandate of weekly PCR tests for unvaccinated staff, which became effective on June 17, have since been home. According to a memo sent to workers, staff are, in their capacity, required to fund their weekly PCR tests. PSA Media speaking with the President of the Steel Workers Union Trinidad and Tobago (SWUTT), Timothy Bailey, was informed of the matter. Bailey reported to the PSA that the matter was now before the Industrial Court and that the union was awaiting a date to proceed with the matter.

Bailey stated to PSA Media that he continues to maintain that vaccination is a person’s choice and reiterated that no one should be denied work because of his or her vaccination status. He added that denying unvaccinated person entry made no sense, as vaccinated persons, according to the Centers for Disease Control and Prevention (CDC), were easily contracting and spreading the Covid-19 virus. “I believe strongly in personal choice!” said Bailey.

President of the PSA, in a previous social media broadcast, had stated that by law, an employer was not in any way entitled to say to an employee, “Take the vaccine or do not come back to work.” Duke stated that public sector or private sector, unvaccinated employees, who were not exhibiting signs and symptoms, had to be allowed to perform their work-related duties at their places of work. He said that any employer, who did not allow such, was committing an Industrial Relations Offence, referred to as an Illegal Lockout.

Duke, in his live, had further explained that an Illegal Lock Out occurred when an employer protested against an employee, forcing the employee to accept something that he or she did not want to accept. He shared that instead of the employer negotiating, he or she forcibly places a lock on his gate and says, “you cannot enter my workplace unless you do this.”

President of the Industrial Court, Deborah Thomas-Felix had previously stated that employers could not alter terms and conditions to make the Covid-19 vaccination mandatory for employees. She said that organizations could not demand that their workers take the vaccine.

Former Chairman of the Equal Opportunities Commission (EOC), Lynette Seebaran-Suite also stated that the only way persons could be forced to take a vaccine was if a law was passed in Parliament. She said that currently, no such law existed and that it will be very unlikely that such a law will be passed.