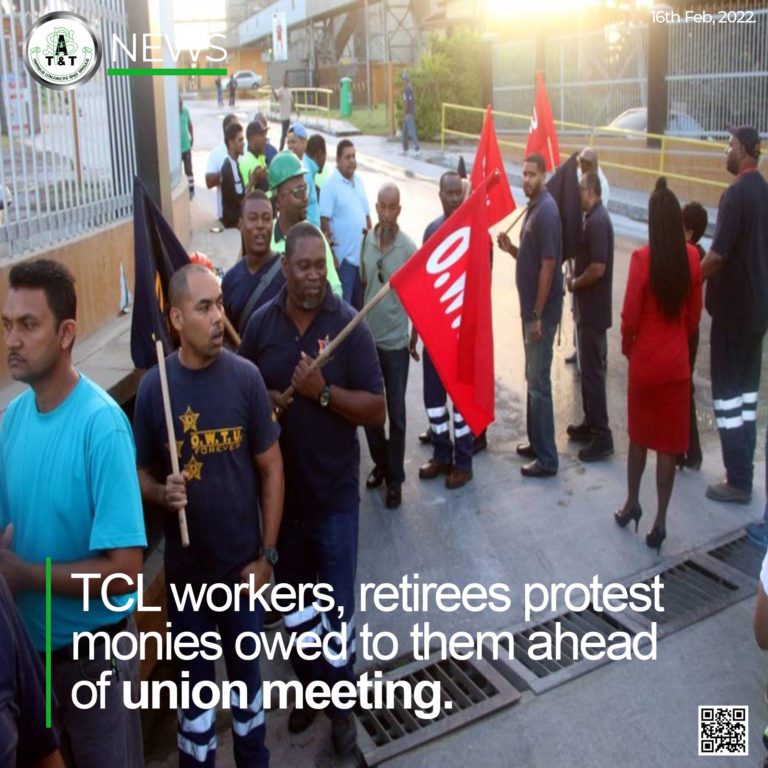 Employees and retirees of Trinidad Cement Limited have staged demonstrations outside the company’s Claxton Bay compound for almost two months, twice a week, expressing their frustrations about the nonpayment of cost of living allowances (COLA) and other benefits.

Tuesday was no different, just one day before TCL management was set to meet with the Oil Field Workers Trade Union to have the matter settled, workers continued to make their presence known. These were the words of one demonstrator, a retiree Learie Mike, who said they are demanding payment of outstanding benefits. “ We are still showing our presence so management could understand that we really are serious about getting our outstanding monies since 2014.”

He went on, “We have been protesting to get them to meet with the union, and now that there is a date, we are expecting that they will settle outstanding matters.”

“This is monies owed, this is not a meeting to negotiate and this is why we are frustrated with the company for not paying it,” Mike emphasized.

During an interview last week Chief Industrial Relations Officer of the Oilfields Workers Trade Union, Lyndon Mendoza said, ” We find more often than not, companies are refusing to meet, just denying workers of their rights and their benefits.”

He made it clear that the union is fighting for workers to get what is already theirs. “The issue doesn’t impact only the retirees, it also impacts the current workforce,” Mendoza added.

He went on to explain that the issue stemmed from the nonpayment of COLA which then affected the calculations for pension benefits of the retired workers as well as future retirees.

According to him, the ongoing protest action is what resulted in Wednesday’s meeting with the union.