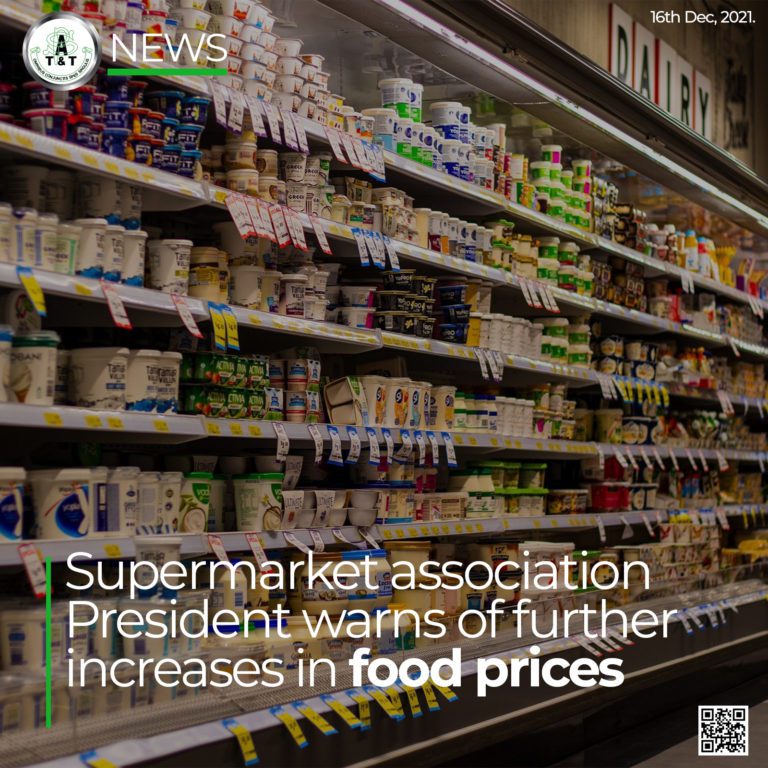 With the cost of imports and freight charges increasing alarmingly, President of the Supermarket Association of Trinidad and Tobago Rajiv Diptee has warned of further increases in food prices.

During an interview with Mr. Diptee on Thursday, he gave PSA media his take on the situation. He said despite the government’s recent VAT removal exercise, prices may not vary much because of global accessibility challenges due to the pandemic. He explained that with alarming increases to clear containers, suppliers are saying they can no longer absorb these increases. Also, with Trinidad and Tobago being an import-dependent country, there is not much that can be done.

He added, “There is very little we can do and as price increases do come along we will have to consider passing them on.”

Mr. Diptee noted that this is a worldwide phenomenon.

With Christmas less than 10 days away, Mr. Diptee reminded customers that his members have an array of deals and specials in light of the current economic situation.

When asked if the shipping situation is expected to normalize, Mr. Diptee said that this may be tied back to vaccination policies in workplaces.

“The elephant in the room with respect to shipping is, it’s indelibly tied back to vaccination so this is a global issue. If a factory in Asia or North America and their workforce is not fully vaccinated, they cannot get back to 100 percent output,” Diptee explained.

He said as human beings, with respect to returning to normal, we have to bite the bullet with vaccination as everything is tied back to vaccination.

And on the topic of safe zone expansion, the association’s President added that he does agree with AMCHAM’s call to have public spaces and government spaces become safe zones but with only half the population fully vaccinated, expanding safe zones to supermarkets is not feasible and according to him, it will require them to only that half of the population which he said the association is not prepared to consider.

“That does not represent a feasible target when you talk about them not having access to foodstuff at the supermarket. That will create a situation where they are asking us to reject half the population and that is not something we are prepared to consider,” Diptee said as he explained his association’s stance on the matter.

He made it clear that access to food and medicine is a universal and humanitarian right.