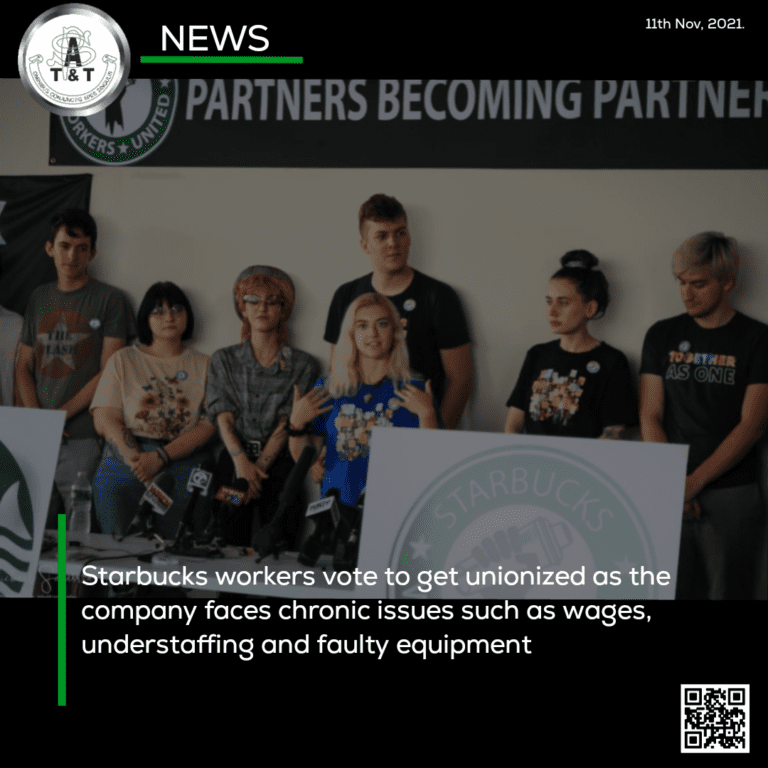 Starbucks workers, hoping to organize a union at three Buffalo, New York, cafes, scored a victory on Thursday, even as the company faced pushback from investors over plans to raise wages next year.

On Thursday, the National Labor Relations Board sided with workers. Starbucks had been hoping to open voting to the entire Buffalo market in a single ballot. The decision means three separate unit elections will take place at the stores, with mail-in ballots due on Dec. 8, and a vote count on Dec. 9. More than 100 workers are eligible to vote.

If workers vote in favor of organizing, it will mark the first successful attempt at unionization for the coffee giant in the U.S. and could make waves in the industry.

Starbucks Workers United, the group organizing the vote, cheered the decision which came the same day Starbucks told investors that fiscal 2022 earnings would be lower than analysts were predicting. The company blamed both the ongoing impact of the Covid-19 pandemic as well as rising costs, which include wages.

It’s a rare union vote for the coffee giant, which has fought off a handful of other unionization efforts over the last two decades. It comes at a time of increasing worker unrest across the U.S.

On Wednesday, Starbucks announced it would be raising pay for workers based on market and tenure. By summer 2022, its pay floor will be $15 an hour, with an average hourly wage of $17 an hour, up from the current average of $14.

Restaurants across the U.S have been raising wages in recent months, in an attempt to woo workers back to the industry. A labour shortage has reduced sales as restaurants have cut back on hours and scale back services. This has led to a pick up in labor union activity.

Starbucks is known for calling its employees “partners” and touting that it has among the most progressive benefits in the fast food and restaurant space. It has been encouraging workers not to vote to unionize over the last few months. In a statement on Thursday, Starbucks said it was reviewing the NLRB ruling and evaluating its options

Back in August, a group of 50 Starbucks employees across three stores in Buffalo, New York rallied to form a union — leading the charge to build the chain’s first unionized workforce among all of its stores nationwide. The organizing committee initially attempted to represent all 20 Starbucks locations in the Buffalo area from 18 stores. Now, employees of three more Buffalo-area locations, in addition to the first three that already signed on, have filed for union elections.

Never in its 50-year history has Starbucks relied on union workers to serve up lattes at its U.S. cafes.