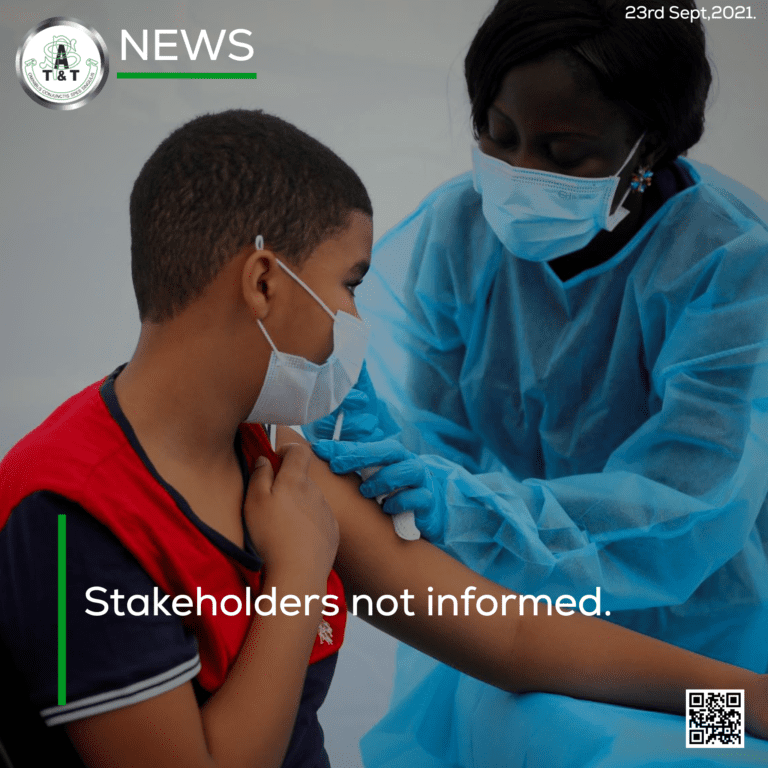 According to Public Relations Officer for the Movement for Concerned Parents Shamila  Raheem, stakeholders were not informed that schools would be opened on October 4th for vaccinated students forms 4 to 6. Raheem stated, “ How are only the vaccinated allowed back in school when the Minister of Education stated that the children would coexist, that there would be no discrimination.”

PRO Raheem was referring to August when Education Minister Dr. Nyan Gadsby-Dolly stated that both vaccinated and unvaccinated students would be welcomed back to school and that there would be no discrimination of either category.

When asked her thoughts on the situation Raheem said “ It is a blatant disrespect to the children, to the parents and to the teachers, children are minors their vaccination should remain voluntary and private yet the government chooses to go ahead with their vaccinate to be educated movement when education is a right deserved by all students. How will it work when teachers are allowed to keep their vaccination status private and confidential which is only right but students are not?”

Raheem stated to PSA media that she wanted to know how the government planned for this idea to work saying “ Children will have to interact with others. Will the cafeteria lady be vaccinated, the janitor? What about the unvaccinated students, how will they do their labs and practicals if they are not allowed in school? Will the teachers have to do the live face-to-face class and then run to find a computer to do the online class with the rest of their students?”

Raheem went on to state that PTA’s were not allowed to have fundraisers during the course of the pandemic leaving schools with a lack of funds as they were barely receiving funds from the government.

She asked, “How are schools to manage if they are not given funds and the schools have to ask local businesses for help? The schools are not sanitized and need money in order to be sanitized so how will it work?”

The Government stated that arrangements to facilitate teaching and learning at these institutions are ongoing and that the reopening guidelines will be made available to principals in the coming week. However, teachers and fully vaccinated students of this cohort are expected to report to schools physically for classes in the next two weeks.

Approximately over 33,000 persons from the 12-18 age group have received their first dose of the approved covid-19 vaccine which is around only 25%. PRO Shamila Raheem states that the government should be held accountable for their words and that all students should be allowed the same education.

It has been over a year since school children have been to school.