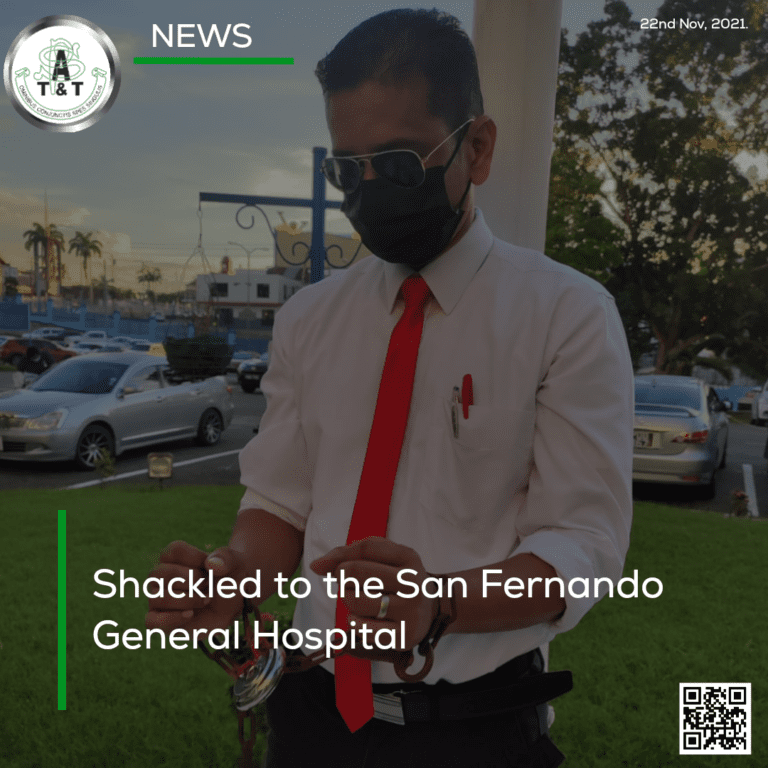 “It never was a protest.”

Those were the first words spoken by Public Services Association(PSA) Industrial Relations Officer(IRO), Ricardo Goolcharan after he had finished highlighting the plight of all healthcare workers during the pandemic.

Standing shackled in chains and dumb to the media personnel outside the San Fernando General Hospital’s main entrance, Goolcharan stated to PSA media afterwards that his actions were symbolic of the silent oppression that healthcare workers endured daily without the attention. He said that he chose drama and art to highlight the unfairness meted out to those workers and reiterated, “It was not a protest.”

Speaking exclusively to PSA media Goolcharan said, “Something is fundamentally wrong for an employer to change the terms and conditions of workers without asking their consent.” He likened that practice to slavery and noted, “Well that is exactly what is happening to the healthcare workers at the SWRHA.”

He stated, during the pandemic, workers saw their hours of work changed from 8 to ten to twelve hours and management at the South West Regional Health Authority(SWRHA) had implemented that change by simply telling workers, “Or else……”

He noted that this was bothersome to him because the workers stood to lose their one day off that they were afforded by law, but were obliged to follow the directive because of the contractual arrangement that they were confined to.

In a later statement, Goolcharan said: “What must remain on the front burner is these workers have given to society under the most adverse of conditions. Now as shift workers the management wants to change the terms and conditions by forcing them to do more hours. They are tired, they are frustrated and our citizens and the health care workers must pay the ultimate price.” He continued by saying: “The nurse-to-patient ratio on some of these wards are 15 patients to one nurse and in other cases it is more.” The IRO Officer noted that the long hours and the high patient to staff ratio is not only unethical but it has also compromised our healthcare system.

In speaking to PSA media, Goolcharan lamented that the contractual policy was affecting all healthcare workers and not principally restricted to one sector. He stated some of those workers cannot even approach the bank for a loan because of their contracted labour.

When asked why he thought that was happening despite the kudos afforded to healthcare workers during the pandemic, Goolcharan replied: “Maybe because it is a female dominated profession.”

However, he stated that he was consoled by the response of the SWRHA security officers and the police officers who was understanding of the stance he had taken since he was not in violation of any public health ordinances. He also noted that the management at the RHA had agreed to speak to him and the PSA, on behalf of all healthcare workers at a date to be announced.