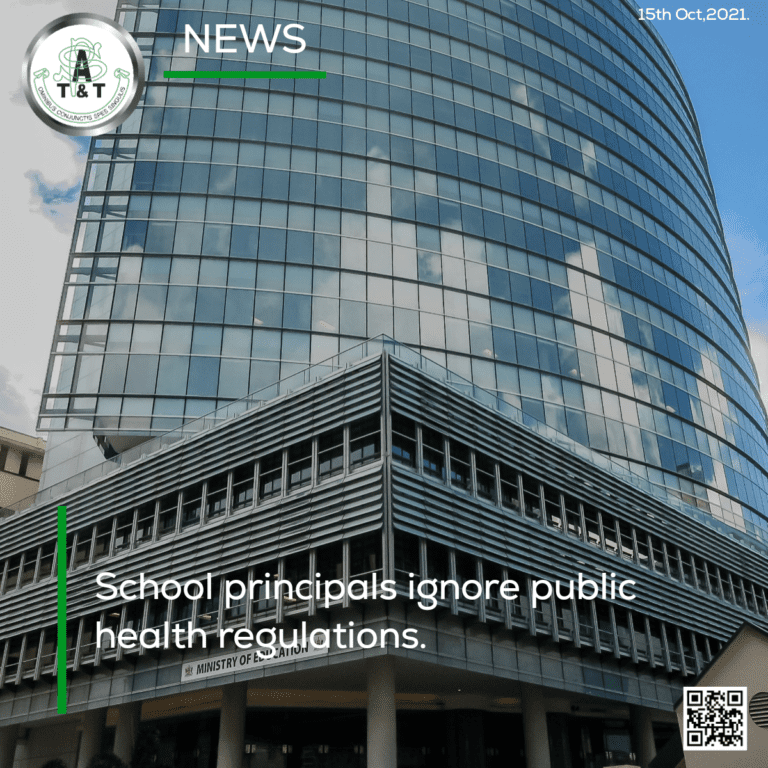 Despite the Permanent Secretary at the Education Ministry changing an earlier directive she gave instructing school principals to roster all clerical/administrative and support staff for duty at least four days for the week, some principals have continued to roster those workers for four and even five workdays.

In a series of correspondences forwarded to PSA media yesterday, the Permanent Secretary at the Ministry of Education, Lenor Baptiste-Simmons in her last circular memorandum sent to primary and secondary school principals as well as to school supervisors on October 6 advised, “With effect from October 11, 2021, all clerical/administrative and support staff assigned to Primary and Secondary schools are required to report for duty at the schools to which they are assigned at least three days for the week.” The memo went on to say, “Principals are therefore advised to ensure that staff is rostered to facilitate the smooth operations at schools.”

Those instructions on October 6 differed from the previous memo that was sent out on September 17 in which Baptiste-Simmons relayed, “All clerical/administrative and support staff assigned to Primary and Secondary schools are required to report for duty at the schools to which they are assigned at least four days per week.” The reason given for those instructions according to the memo is to facilitate the government’s announcement that schools will reopen for fully vaccinated students from forms four to six. The memo stated: “Staff who were previously deemed non-essential are required to return to work since schools need to be fully functional to facilitate the delivery of the curriculum.”

That original message from the Permanent Secretary mandating laboratory assistants, laboratory technicians, farm-hands, clerks, typists, and other clerical/administrative and supporting staff to be out at work for at least four days for the week was challenged by the Public Services Association(PSA) on 28 September and due to this intervention, her instructions were retracted to the one sent on October 6 reducing the number of days from four to three.

In that letter addressed to Permanent Secretary, Baptiste-Simmons, the PSA argued that the arrangement that was supposed to begin on 20 September was unnecessary and a violation of the public health regulations.

It read: “This decision was made unilaterally and without the consultation of the PSA which is the recognised representative union for these workers. No consideration has been given for parents of minor children who have no support system and are forced to stay at home with their children due to the closure of schools and day-care facilities.” The letter went on to highlight to the Permanent Secretary that any threats against workers’ salaries because they have no choice but to stay at home with their children, will be considered an illicit action and will be resisted by the union.

The letter also stated, “The Ministry’s unilateral decision to stop rotation took no consideration of the existing health regulations which calls for social distancing. Instead, the Ministry’s directive has now placed hundreds of workers, their families, and the wider citizenry at unnecessary risk.” The union reminded the Permanent Secretary that primary schools were closed and therefore those workers didn’t have to be at school.

When contacted for a response, President of the Association of Principals of Public Secondary Schools of Trinidad and Tobago, Sheera Carrington-James disagreed. “There is a philosophy and strategy and policy of school-based management and therefore I will not comment on who is doing what at their school. However, what I would say at this time the management of schools requires administrative support. There is no principal, no middle management that can run a school single-handedly without the support of the clerical and auxiliary staff. So, if a school principal determines that he/she can bring out their auxiliary staff, then I expect that they would so do under school-based management.” She said.

She ended by saying: “I do not know that any principal flouts the public health regulations. We are guided by the Education Ministry and by the Ministry of Health through our line Ministry and all of us make every attempt to comply with those regulations.”

However, with regards to secondary schools the PSA in its letter to Permanent Secretary, Baptiste-Simmons noted: “Even at Secondary schools where forms 4, 5 and 6 students are to come out to school, surely not all the clerical and administrative staff are required to report for duty every day, particularly in light of the close quarters within which they will be forced to function. PSA recommended rotation for those staff members while other employees such as Lab Assistants and Lab Technicians should only be out to work as necessary.” The letter noted that the idea of instructing these workers to report for duty nearly every day will worsen the Covid-19 situation in the country. It went on to explain that even from a managerial perspective the decision made by the Education Ministry does not make sense since if one staff member falls ill with the virus it will result in the total closure of the school. Instead, the PSA asked for the day-in day-out rotation system to be continued.