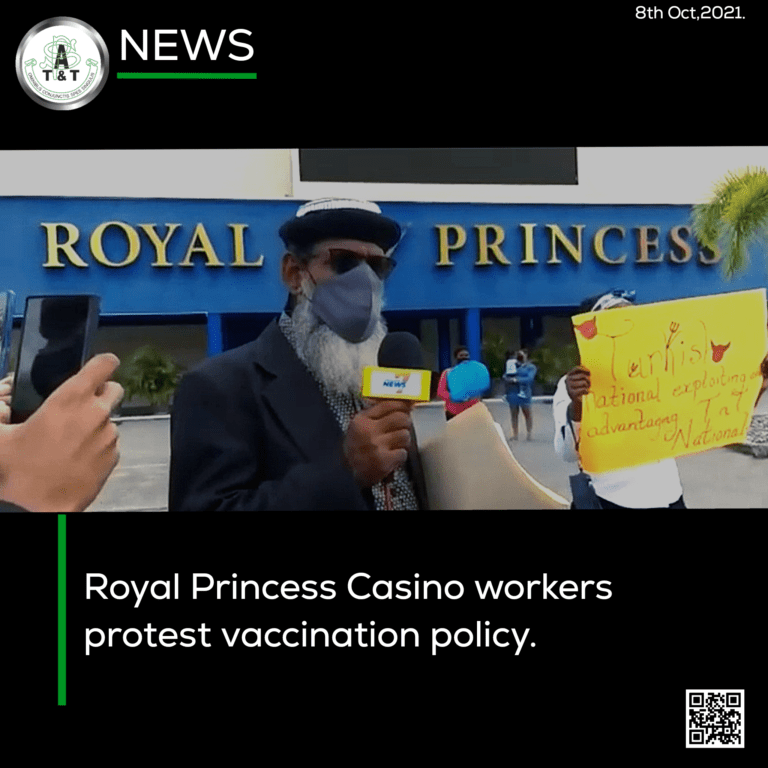 Workers at the Royal Princess Casino earlier today protested against the vaccination policy put into place by their bosses due to the opening of safe zones. “On the 30th they told us they are only allowing vaccinated staff in the building so come Monday all the unvaccinated staff can not be on the compound,” said a supervisor in training.

According to the supervisor there were many reasons for why they were protesting today. “We just find that it is unfair that they do not want to give us what rightfully belongs to us,” she said, continuing to state that they did not want them working in the company anymore as it was made perfectly clear by the business putting out an ad in the newspapers to replace them.

They do not want to give us our holiday money she stated, “You don’t want to give us a severage package for the years it is not an easy place to work. You know what it’s like to want to stay home if your child is sick but then you have to study. Oh gosh if I stay home I will get in trouble.”

“When you walk inside the building you can’t come back out to get anything to eat or anything like that and then you don’t really feed us, we does have to beg for things to eat,” she said.

We have been in lock down for 6 months and they have not even given us a dollar, not even when we asked for our holiday money during the lockdown, stated the supervisor.

“This establishment is a british national and imagine we have a foreign national in this country that is oppressing our citizens in this country. This government is allowing this to happen, what our Prime Minister did when he indicated on the 11th that entertainment industries are going to be reopen only to those who took the injection what the Prime Minister did in fact was subvert the feelings of all these workers,’ said Mr. Abdullah.

An incentive was given to the women workers through a whatsapp text that stated that if the workers got vaccinated they would receive 500 dollars after a six month period had passed.