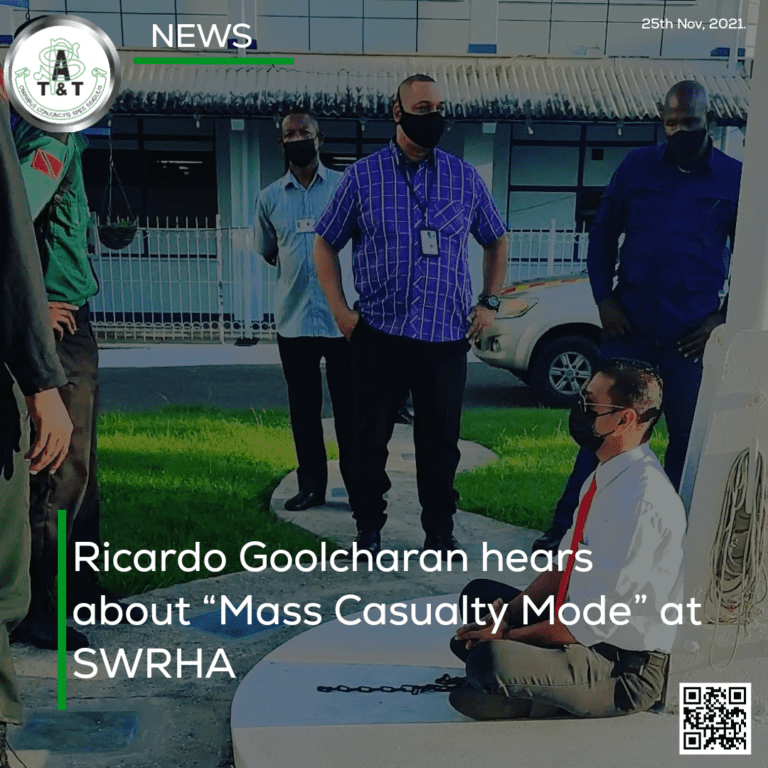 “Mass casualty mode” was the chosen phrase that Chief Executive Officer, Brian Armour, and his management team picked for the period that the South West Regional Health Authority(SWRHA) has moved into.

That was one of the highlights that Public Services Association(PSA) Industrial Relations Officer(IRO), Ricardo Goolcharan noted when the PSA representatives met with the management at the SWRHA yesterday.

IRO Goolcharan who on Monday led a symbolic expression of healthcare workers oppression and suffering while shackled in front of the San Fernando General Hospital made the virtual submission on behalf of workers whilst IRO Marvin Lee Davis; General Secretary, Susan Grey; Deputy General Secretary Ria Ralph Watson; and 2nd Vice President Avinash Maharahj were also in attendance at the virtual meeting.

Speaking with PSA media this morning Goolcharan pointed out that CEO Armour made the point that, “There is a finite amount of human and material resources and as such we have moved into mass casualty mode since the resources were stretched.”

He noted that the CEO verbalized that “Funding was hampering the hiring of staff and he will be writing for more funding to alleviate the shortfall.”

However, as indicated by Goolcharan, “The manpower audit based on the staff to patient ratio and workload index should have been done at the onset of the pandemic because there was a deficit of human resource before the pandemic.”

In addition, he spoke about, “International best practices and the maintaining of workers rights so they are not burnt out. Conditions in which first world countries have and what our country offer our workers in terms of accommodations, functional washroom and a 24-hour canteen for light refreshments.”

Despite those problems, Goolcharan said that he is confident that the meeting will bear fruits for workers. He stated that the SWRHA human resource(HR) manager, Denise Thomas, and CEO Brian Armour had listened well and had engaged the PSA in an honest open dialogue where everyone was allowed to voice their concerns.

Some of the highlights coming out of the meeting for healthcare workers are as follows:

According to Goolcharan: “The PSA firmly believes that the Human Resource is most important and thus should be treated as such. Nothing must be taken for granted to protect all staff.”