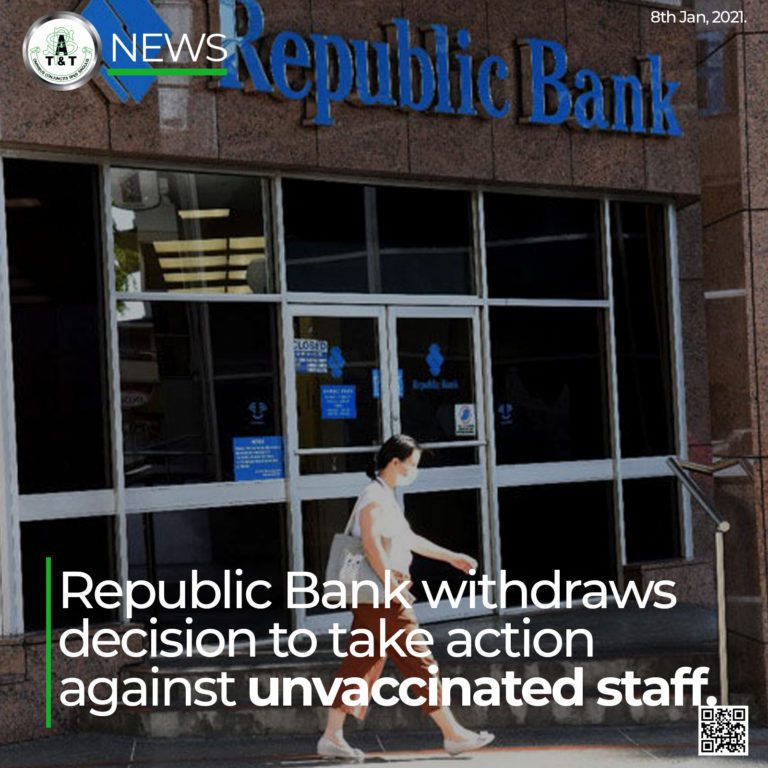 Even though Republic bank withdrew its decision to take action against unvaccinated employees, Representative of the Bankers & Insurance General Workers Union Jason Brown said that they will continue to pursue the matter as the bank usually does not observe good faith protocols.

PSA Media reached out to Mr. Brown on Friday following a circular being released to members of staff which stated that effective immediately and until further notice, they have suspended their decision to take any further disciplinary action against workers who may be in breach of the return to work policy.

He said this exacerbates the unilateralism as the union was only informed of the decision by way of its members and not through the bank.

“The bank operates in such a unilateral manner…the union continues to build its case because the suspension of the intent to suspend workers is not the end of it,” Brown said.

To date, he noted said that no discussions have been held since the bank’s implementation of its policy in September.

According to Republic Bank, vaccination levels among its employees stand at over 90 percent with 3,093 members of staff vaccinated leaving only 302 unvaccinated. From September 6th, 2021 Republic Bank mandated that all staff be vaccinated. Otherwise, they were required to provide a negative PCR test every 2 weeks.

Brown claimed that initially, all 302 unvaccinated staff members were in line for suspension as they already received written warnings.

But now, the institution said they will continue to encourage vaccination by way of education and implored the unvaccinated to reconsider their position.

Mr. Brown also expressed concern about reports of coercion by way of cash rewards in an attempt to get staff vaccinated. He explained that by way of doing this, the bank may be breaking its own conventions as Republic Bank employees are not allowed to receive cash rewards according to its manual

“We will always be concerned with any type of influence or coercion that plays on the mind of a worker other than education in an attempt to get them vaccinated,” he added.

Just one month ago, workers of RBL Tunapuna invoked their legal right to refuse work in a hazardous environment after a manager tested positive for covid19 and the bank refused to sanitize the building.

The Bankers and Insurance General Workers Union stands alongside the JointTrade Union Movement and said that they are all for vaccination but they are against the infringement of one’s right to have a choice.