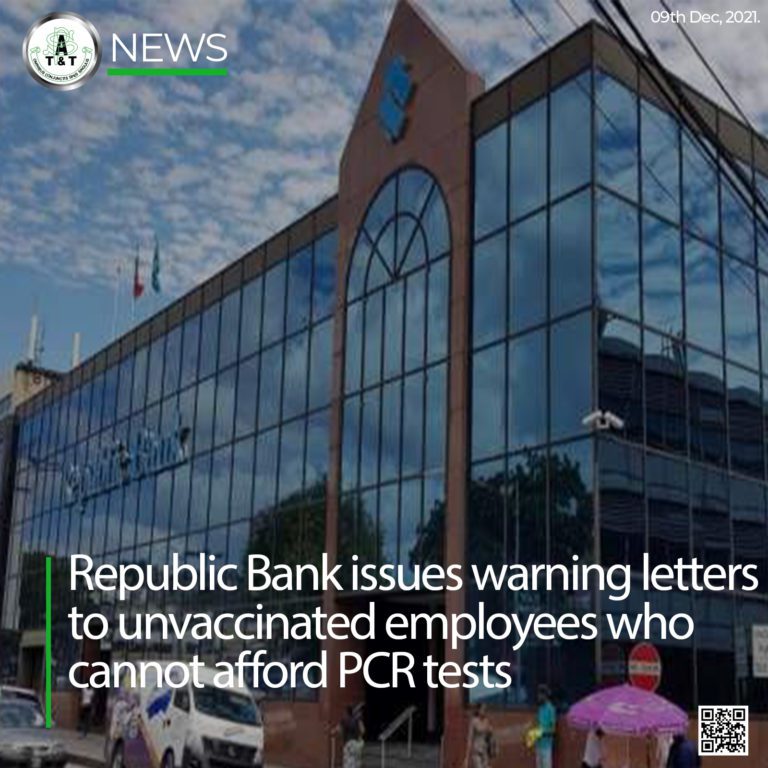 According to Second Vice President of the Banking Insurance and General Workers Union Jason Brown, some 300 unvaccinated members of staff at Republic Bank Limited have received warning letters after being unable to afford mandatory PCR tests.

This was disclosed at a joint select committee meeting on the unemployment issues during the pandemic on Wednesday.

Mr. Brown said the union is currently in the process of data collection to say exactly how many members have voiced their concerns on the matter.

“On the November 29th, 2021, Republic bank would have begun its mandate to issue warning letters to unvaccinated workers who have not provided PCR tests and who simply can’t afford.”

Brown also accused Republic Bank of selectively choosing what they want to do in terms of covid-19. He said measures such as social distancing are not strictly implemented.

“They have conveniently turned a blind eye to some public health measures. Some of the things we are telling them is that before vaccination, there were three W’s. Do not cherry pick which ones you want to use.”

He added that persons should not be forced or threatened to get vaccinated. Instead, people should be engaged and educated and their voices heard on top of the covid-19 vaccine.

RBL implemented the mandatory PCR testing for unvaccinated staff from September 6 as part of its return-to-work policy.

According to him, these policies arose due to a lack of proper consultations. Mr. Brown further explained that if there were in fact proper consultations, there would not have been the need for 10 employees to take this issue to the industrial court. As such, he said that based on the bank’s timeline, these workers could face possible suspension in January before the matter is heard.

“If that had happened, we could have averted going to the industrial court. Now that matter is not going to be heard until February 1st and 10th. …those workers could possibly be suspended in January before the court date in February,” Brown said.