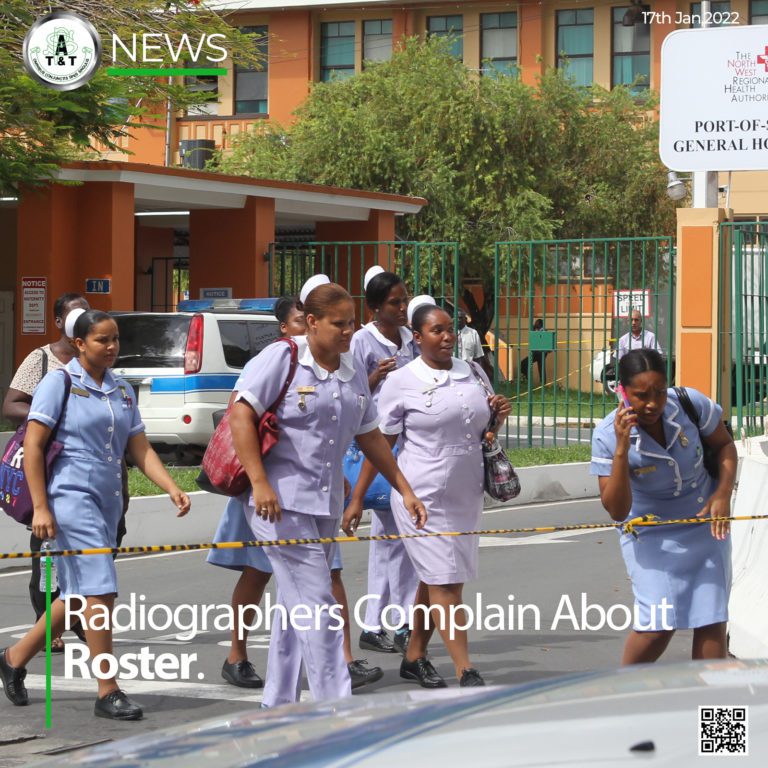 Haphazard rostering at the radiography department of the North West Regional Health Authority(NWRHA) is affecting staff as well as patients.

When PSA Media interviewed staff from the department last week, they leveled several criticisms against the Acting Senior Radiographer who also holds the title, Manager Patient Support Services. They said their new boss took over the department in February last year and by April started to make a total change in the way things were being done. However, the Radiographers agreed that amongst all their complaints, the scheduling of staff remained the most frustrating.

“It is not fair, one person might be working a whole bunch of mornings while another will be working a whole bunch of evenings. It has to be fair. Your body has to go through a certain process you work morning, evening, and night and get some time off and you return to work,” one worker said. She continued, “I mean, you cannot work five evenings and get one day off and return to work for two nights or two mornings. It is stressing out our bodies.”

Another worker in speaking to PSA Media noted that since 2008 Radiographers at the NWRHA had a written agreement that the Radiographer II will make the roster but since the new Senior Radiographer took charge that was changed without any consultation with the majority recognized union. The workers noted that a memo was sent to workers from the Chief Executive Officer(CEO), Salisha Baksh saying, “the Senior Radiographer will be overseeing the daily operations of the department and will now be responsible for the making of the roster.”

During the interview, PSA Media also learned that in the past the Radiographer II was the one who did the rostering. “There was a meeting that we went to where PSA head Watson Duke was involved in discussion with RHA heads and one of the things that came out of that meeting was that the Radiographer II will return to making the roster.” That worker noted that this never happened.

When asked why the new manager wanted the roster changed, one worker said, “The normal working hours per month is 160 hours. The roster agreement allows a rest day and two days off. With this, it is acknowledged that hours will be short some months. The agreement is once you work two nights then it’s a rest day and two clear days off. One night then two days off.” She noted that the new manager did not agree with persons working less than 160 hours per month and in the end, persons began working more than 160 hours per month.

It is for those reasons the Radiographers told PSA Media that they have decided to return to their original terms and conditions as was agreed to with the Chief Personnel Officer(CPO) from the beginning of their tenure which is working Monday to Friday at 7am to 3pm and after the scheduled time will be on-call. They said, “Due to the heavy workload the Radiographers  decided to facilitate the institution and work a shift system but the management took advantage of the situation and is now enforcing the Radiographers to work a shift system as if they are shift workers.” They claimed that they did not get the benefits of shift workers and have decided to risk getting warning letters regularly rather than work with an unjust system that does not have their health and well-being in mind.

According to one worker, “To add insult to injury, we were working with the Senior Radiographer’s roster in hopes that we would work out something and it never happened. Then we saw where she took away our overtime and hired other persons from outside. You cannot say that there is no money to pay overtime but you can pay other people.”

When asked how does all this affect patients’ quality of care, one worker said, “Seasonals (Part-Time Workers) as they are called are asked to fill in the spot but she is putting them to work by themselves. There are numerous times where there are many shifts both at the Port-of-Spain General Hospital and St. James Medical Sciences Complex which are not covered. So, at times there are no Radiographers on duty at certain points in time.” She added, “While there are some experienced seasonals, who knows what they are doing, others are inexperienced and there have been numerous complaints from doctors about the quality of the X-rays.”

PSA Media contacted the secretary of CEO, Salisha Baksh, and was told that we can expect a return call from an Industrial Relations Officer, however, this did not happen.

The Radiography department of the Port-of-Spain General Hospital does not only support patients at that General Hospital, but also Carenage Health Centre, National Radiotherapy Centre, and the St. James District Health Facility.