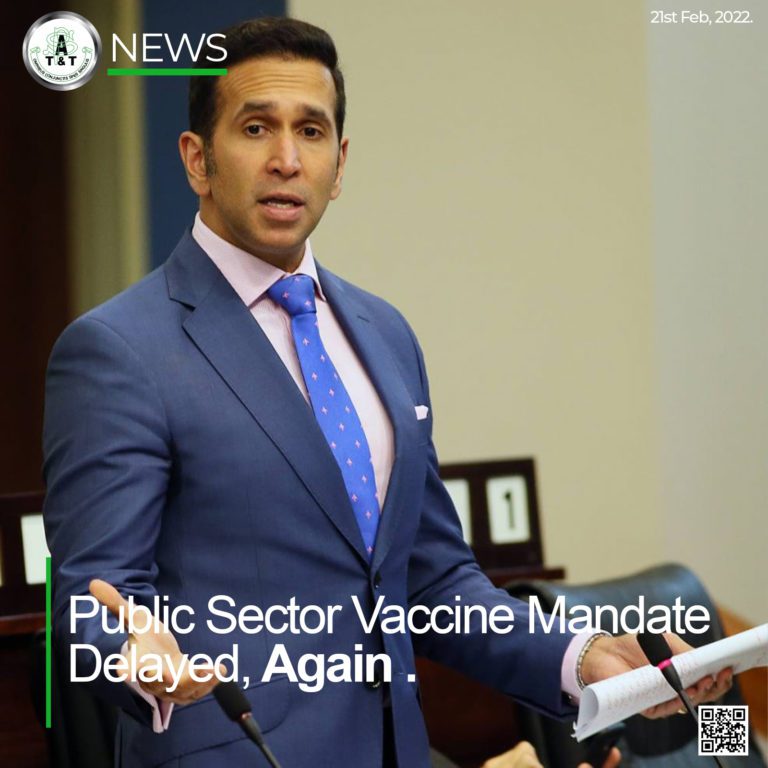 The government’s public sector vaccine mandate has been yet again extended but this time it seems by default as Prime Minister Dr . Rowley has left for Qatar.

First set to take effect on January 17th, Dr. Rowley said public servants who show up to work unvaccinated will be placed on furlough or no pay leave. But, satisfied with vaccination numbers, he gave a further one-month extension, February 17th. Now all eyes are government awaiting legislation.

In a press conference on Friday, only when asked by a reporter, Attorney General Faris Al Rawi said, “The Office of the Attorney General received submissions from a number of stakeholders which we have factored. The law has been drafted but that law must be considered in the state and condition of our science.”

He added that a number of issues have been addressed such as that of liability, both the public and private sector as well as the ability to roll out it in separated packages, all of which he maintained has been drafted and completed.

The trade union movement including the PSA has been standing firm against this move to make the public sector a quasi- safe zone, also advising workers against disclosing their vaccination status.

Avinash Maharajh, Second Vice President of the PSA told PSA Media that the union is ready for any eventuality. He stated, “We will defend workers rights to choose at all costs,” and that the idea of a quasi-safe zone was “dotish and bereft of any logic.”

He said, “Safe Zones are a fallacy and a product borne out of the mind of a tyrannical leader hellbent on distressing and bullying the citizenry. The Government has defined a safe zone as one where only vaccinated persons are allowed. But how can this be safe if you can still contract the virus and transmit the virus even if you are vaccinated? Quasi-safe zones are even more rubbish. So, the workers must be fully vaccinated but the public they interact with does not need to be vaccinated and not to belabor the point but both vaccinated and unvaccinated persons can spread the virus. Furthermore, many ministries and regional corporations do not have basic hygienic products such as toilet paper, soap, and hand sanitizers and are plagued with rat and pigeon infestations but the Government wants to call them safe zones. It is ludicrous. In my observations, safe zones pose a greater risk than places that are not safe zones because in safe zones vaccinated people interact in close proximity, no social distancing at restaurants, bars, and other places without masks and thus pose a greater risk for spreading of the disease.”