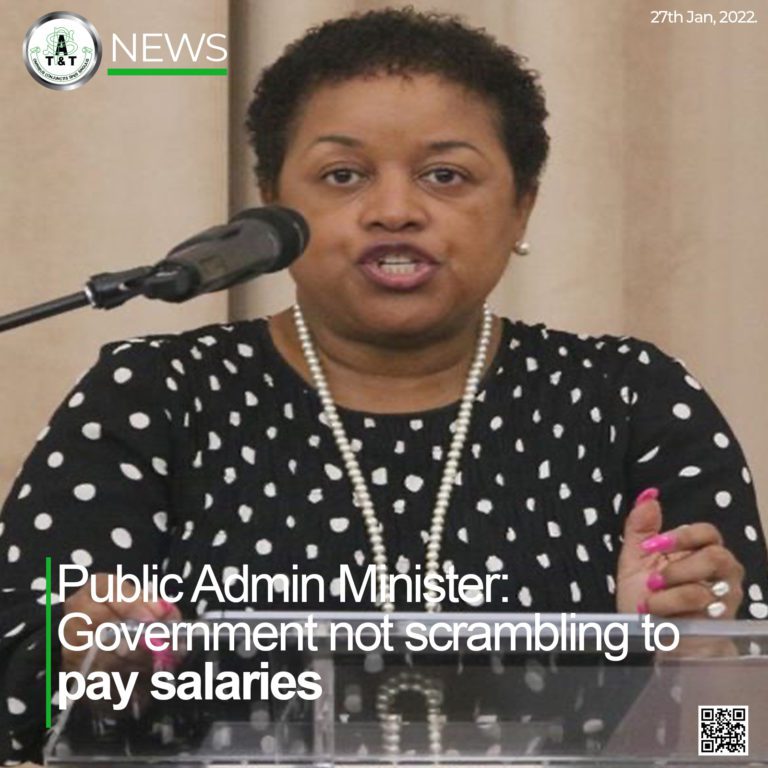 “To ensure the timely payment of salaries and wages to public officers, not scrambling, the sums were transferred with the relevant approvals from other allocations, namely the allocations for rental property and other contracted services,” Minister West told the Senate on Wednesday.

She was responding to claims made by Opposition Senator Wade Mark who said that the government was scrambling to meet its salary commitments following Minister West’s disclosure last week that rent monies were transferred to pay salaries.

As a result, she said that the Chief Personnel Officer had discussions with Finance Minister Colm Imbert to fill gaps in the allocations to cover underfunded areas. According to her, “Arising out of those discussions, a warrant was issued by the finance minister to settle certain expenses,” some of which include $2million in rental and leasing properties for the personnel department.

This as her ministry sought approval for an overall increase of $8,640,671 for the personnel department. At last week’s Standing Finance Committee, Minister West explained that at the end of the year there was a shortfall that amounted to $2,192,433 and the allocation requested by the Chief Personnel Officer for the year was $7.6 million but the department only received $7 million.

In the Senate, she went on to explain, “The only thing that we are seeking now is to get approval for the transfer of funds to cover rent that had been agreed and settled a long time ago and was due before the end of the last fiscal”.

She continued, “One of the heads of expenditure which was underfunded was personal expenditure, salaries & wages and goods & services under which contracted officers are paid.”

Despite being unable to confirm claims of a $44 million expenditure, Minister West gave assurances that the CPO’s job evaluation exercise is going smoothly. She stated that there have been hiccups due to pushback from unions but they are in fact trying to make up for time lost and as such, the evaluation is expected to be completed in 2022.

“The exercise is progressing quite nicely. There have recently been some hiccups mainly because of the involvement with the unions and mainly because there has been some pushback. We are trying to make up for the slight slippage in time to ensure that it keeps more or less on track. We expect to complete that exercise during the course of 2022,” she remarked.

In August 2021, CPO Commander Dr. Darryl Dindial expressed his gratitude to all those involved in the exercise and reminded all stakeholders that their continued commitment and relentless focus is be required to enable the successful completion of the project. He further acknowledged the invaluable role of the Public Services Association and noted that he looks forward to continuing working with them during the remaining phases of the exercise.

Minister West boasted that under the leadership of the current CPO, the personnel department is providing good support to the people of Trinidad and Tobago.