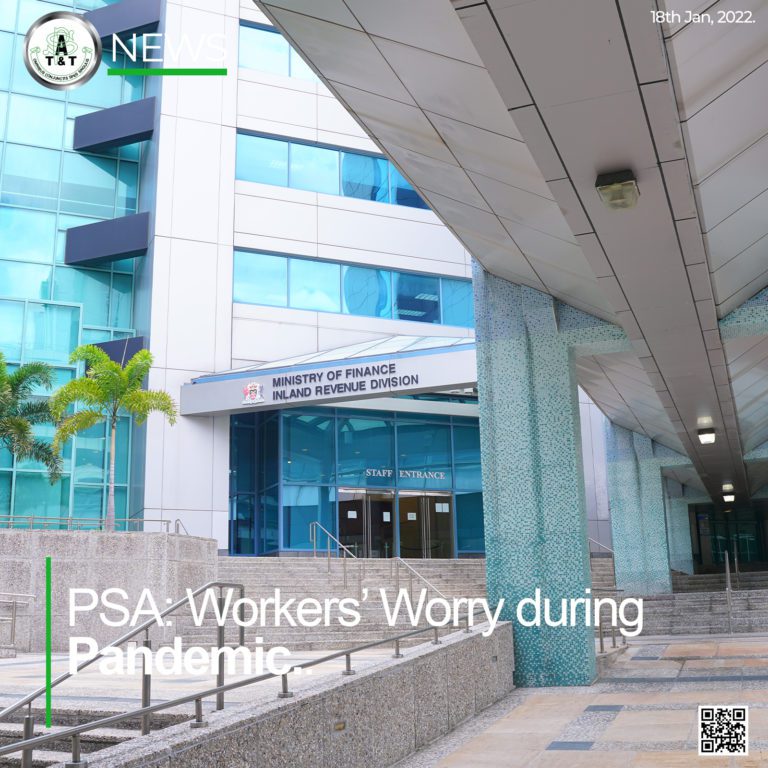 Public Sector employees want to be informed on a timely basis when their co-workers have been hospitalized or quarantined due to Covid-19. That has been one of the most common complaints made by workers across both islands throughout the pandemic.

When PSA Media contacted an Industrial Relations Officer(IRO) who works for the Public Services Association(PSA), Ricardo Goolcharan pointed out that the intent for workers asking for disclosure of their peers’ Covid-19 status is motivated by the lack of social distancing at many public sector workplaces.

He said: “Many times, these workers may miss a co-worker or two for a few days and are not told anything about their whereabouts. When they finally find out through the grapevine, it might be a few days after the fact.” Goolcharan pointed out that this is added stress to workers because sometimes they are left to wonder if they too have contracted the virus since they know that they had been in close contact with the infected worker and had been going home as usual to their families. “They are left to wonder if they have unknowingly spread the virus to others.” He added.

Tobago’s IRO, Hayden Duke agreed that most of the problems affecting public sector workers in Trinidad were mirrored in Tobago. “Up to this morning, I had to take a call from a worker complaining that their managers and supervisors did not want to quarantine employees who were in contact with a co-worker that had the Covid-19 virus.” Duke continued: “Of course, I only got the call because it was evident that water was now more than flour.” “Some managers and supervisors are reluctant to let people go home to quarantine because sometimes they are worried about the workload.” He said.

However, he reasoned that it was important for managers to consider that they cannot wait for symptoms to develop then send persons on quarantine. He noted that it was not the first time he had to write to an establishment in Tobago about that issue.

When PSA Media spoke to 2nd Vice President, Avinash Maharajh, he held the view that the pandemic leave was a major issue that public sector workers were dealing with silently. He said many workers and especially single parents and those who were living with family members that were essential workers were struggling with the ability to care for young children under the age of 12 during the pandemic. Maharajh said: “Because the government has made the closure of the primary school and day-cares effective, parents sometimes had to choose between their children remaining at home with older siblings or neighbours and work.”

Maharajh said, although the pandemic leave had been touted by the government, many employees had raised concern with the PSA that they never received it or were told by their employer that it never existed.

Both the problems of the inaccessibility of the pandemic leave and social distancing at the workplace were intensified when the Prime Minister, Dr. Keith Rowley announced that all public servants will return to work in full by the end of November 2021. That new measure had put an end to the shift rotation system that the public sector was utilizing prior.