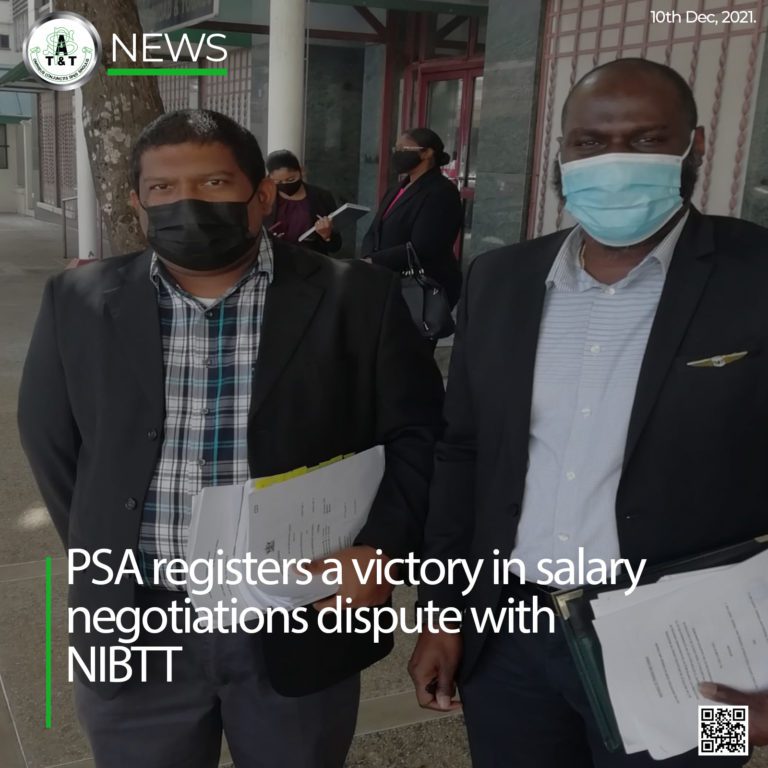 Over 650 workers at the National Insurance Board of Trinidad and Tobago (NIBTT) have moved a step closer to having their long outstanding salary negotiation dispute with their employer resolved.  In the hearing of an Application made by the Minister of Labour, the Industrial Court ruled in favour of the Public Services Association (PSA).

Earlier this year, the PSA reported the existence of a trade dispute to the Minister of Labour over the NIBTT’s failure to make retroactive payments and commence revised salary payments according to the latest collective agreement registered between the parties.

Attorney-at-Law Mr. Christopher Sieuchand, representing the NIBTT, sought to challenge whether or not the issue as reported by the PSA ought to be a trade dispute by suggesting in the alternative that the issue ought to be raised at the Industrial Court as an Interpretation of a Collective Agreement consistent with Section 16(2) of the Industrial Relations Act. However, the Court did not agree with this position and ruled that the matter as reported is a trade dispute. The PSA was represented by Mr. Mahindra Maharaj, Industrial Relations Consultant, and Mr. Shiva Boodhan, Attorney-at-Law.

The oral ruling of Vice-President of the Industrial Court, Mr. Herbert Soverall, will allow for the matter to be returned to the Ministry of Labour for dispute resolution. There, the PSA and NIBTT’s management team will again attempt to resolve their differences in the interest of the workers in the bargaining units failing which the matter will be reported to the Industrial Court.

Executive Officer of the PSA and Chairman of the PSA NIBTT section, Mr. Kellon Wallace, in speaking to PSA Media explained: “The salary negotiations for the period 2014-2016 was signed off on October 26, 2020, and workers were expecting to receive their improved wages by November 30th last year. They were also hoping that by the end of December 2020 they would have received what was owed to them in arrears.”

Wallace also pointed out that this has never happened before and the PSA had to report a trade dispute with the Ministry of Labour in March of this year. This follows a report to the Industrial Court earlier this year that the NIBTT would have committed an Industrial Relations Offence by compelling its workers to accept terms and conditions of employment that were not consistent with the registered collective agreement. That matter is currently awaiting the Court’s judgment.

Wallace is of the view that it was a well thought out legal tactic employed by NIBTT to stall the payment to workers by saying the matter involves an interpretation to the collective agreement, he acknowledged that the judgement in the Industrial Court today was a small step in the right direction to get what was due to workers in terms of revised salaries and retroactive payments.