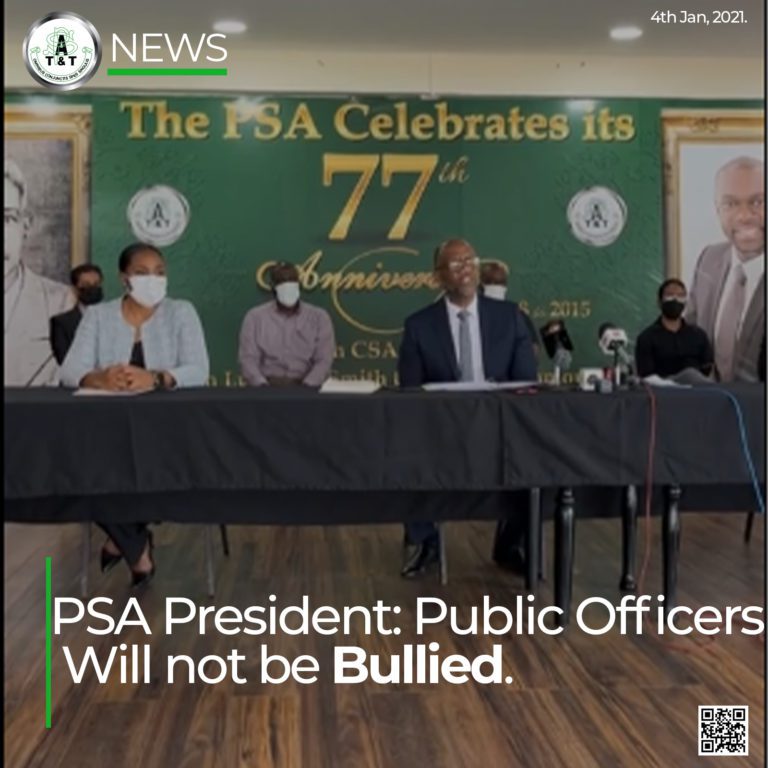 The Public Services Association(PSA) is prepared to utilize all its resources to defend the rights of workers against an unfair and unjust working arrangement that has been instituted by the government.

In his first public statement since his recent appointment as the PSA President, Leroy Baptiste took issue with the quasi-safe zone policy saying it is an oxymoron and send a stern warning to the government that public officers will outrightly reject the government’s attempt to force vaccination on its citizens. He went on to advise workers that they were under no legal compulsion to provide their vaccination status to their employer.

On December 18, Prime Minister, Dr. Keith Rowley gave an ultimatum at a press conference that he hosted at the Diplomatic Centre in St. Ann’s. At that time, he had stated that by mid-January all public servants and employees at state agencies will be required to be vaccinated to work. The alternative according to the Prime Minister was for employees to stay at home without pay.

At the same December 18 conference, Attorney General Faris Al Rawi gave more details saying that the new government policy would involve an amendment to the Public Health Ordinance. He added that the law would go to parliament in January and no special majority would be required to amend it.

However, in a video that was later posted on the PSA Trinbago Facebook page today, President Baptiste said, “Any attempt to unilaterally alter public officers’ terms and conditions of employment in a bid to force them to vaccinate is wrong, harsh, oppressive, and contrary to law.

Baptiste in stating that he was willing to work with the government said that it would be wise if the government engage the trade union in a meaningful and transparent way and have a genuine dialogue.

He said: “The major problem we have with all of this is that as the recognized majority union, where the workers are concerned about anything, it is supposed to be manifested to us first. It is absolutely disrespectful for the recognized union to have to hear about a policy that is aimed at terms and conditions of workers, our members, on TV.”

He went on to say that law does not make anything right and reminded that slavery, segregation, apartheid, and other serious crimes against humanity were also legal at one time and asked both vaccinated and unvaccinated workers to stand in solidarity against the policy.

Industrial Court president Deborah Thomas-Felix has stressed on two occasions that employers cannot unilaterally introduce mandatory covid19 vaccination policies in the workplace as a new term of employment without consultation.