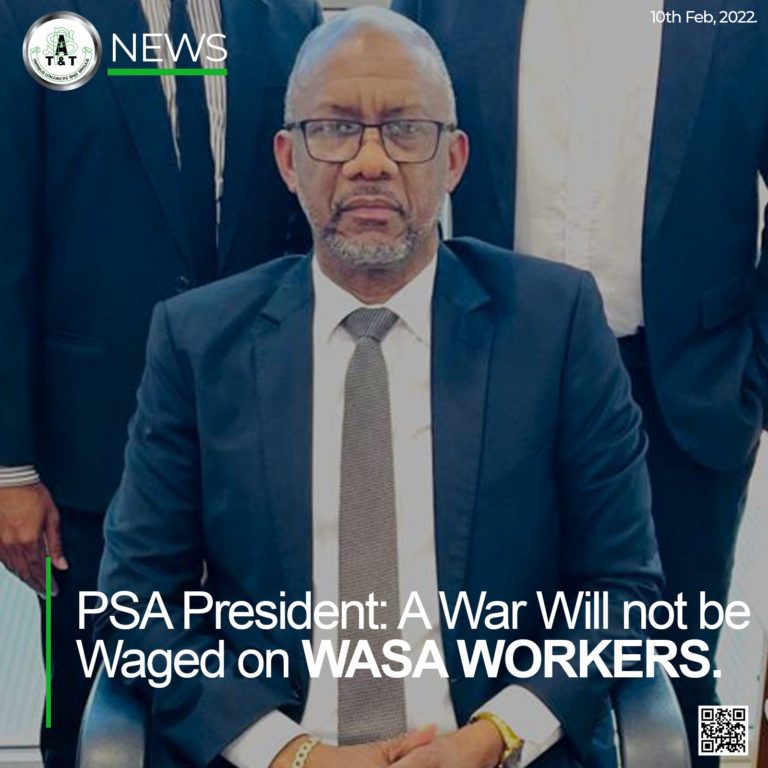 President of the Public Services Association(PSA) Leroy Baptiste has warned Prime Minister Dr. Keith Rowley that the demonisation of the Water and Sewage Authority(WASA) workers will not be tolerated by the PSA.

Instead, President Baptiste outlined alternative problems facing the company which he placed squarely under the responsibility of the present administration which he noted was in charge of the state company for 41 of the 67 years that WASA has been in operation.

At a media conference where the National Union of Government and Federated Workers(NUGFW) President, James Lambert, and National Trade Union Centre of Trinidad and Tobago(NATUC), General Secretary,  Michael Annisette spoke, President Baptiste said, just like NUGFW, the PSA has always been willing to meet with WASA’s management to engage in any restructuring exercise in the interest of the national community.

However, he cautioned: “A playbook is being played out right before our eyes. It starts with the demonisation of WASA which always points to the second aspect, the destruction of workers’ lives. An attack on workers.”

Explaining the way that it is done, President Baptiste said the government usually creates a crisis for which they have been responsible for and then they tell the national public that the crisis must be dealt with immediately.

He noted that it was insulting to hear the Prime Minister on national television telling the population that there was a crisis at WASA, and had invited the trade union movement to the discussion table to solve a problem that had existed for about 23 years. He said that the Prime Minister’s insistence to have the problem solved immediately was just a part of the plan to destroy the lives of more workers.

While urging both the media and the wider public to be alert to the ‘playbook’ that had been played already at Petrotrin, Baptiste informed the main problem facing WASA is a problem of leadership.

He pointed out that a lot of the problems faced at WASA stems from the government’s intervention at the state company. “In the last 10 years at WASA we have had seven CEOs(Chief Executive Officers),” Baptiste said. Noting that each time a CEO was changed programmes and policies were changed.

He also said that the management at WASA has been working on month-to-month contracts and asked, “Could this ever be right?”

Another recommendation that Baptiste had put forward at the media conference was to sell the water at the market rate. He said that the water should be sold at the same rate as our Caricom neighbours. He noted that if this was done then WASA would operate at a profit since this country was selling at a lower rate.

Baptiste in acknowledging that WASA faced multiple problems reiterated that workers’ work rate was not one of those problems.

Also speaking at the media conference NUGFW and NATUC’s President James Lambert maintained that when Prime Minister Dr. Keith Rowley was speaking at the virtual PNM meeting in Laventille, “It appeared that he was blaming the workers at WASA for the problems at the company. And I am speaking generally, it appeared to us that he was saying that the workers are the ones responsible for the situation that WASA is facing.” He added, “And we are saying no to that.  Workers cannot, they ought not to be held culpable for any problems that WASA is going through.”

He noted that while the leaders of the trade union organisations have not disregarded that corruption and other problems have been weakening the state institution, all the boards of directors of all state enterprises have been appointed by the governments in the present and the past.

However, he noted that he had reached out to Public Utilities Minister, Marvin Gonzales and had ironed out some of the misunderstandings that were spoken by the Prime Minister on the platform concerning the role that NATUC and JTUM could play in the discussion between the recognised majority unions. Lambert stated that the meeting between himself and the minister was healthy.

On Saturday, Prime Minister Dr. Keith Rowley at a public meeting in the Laventille West constituency had instructed his Public Utilities Minister, Marvin Gonsales to meet with NATUC and JTUM to discuss the restructuring of WASA. At the time Dr. Rowley had reasoned that it needed to be done because the trade unions in the past had said that the government was intentionally leaving them out of any discussion involving workers.

However, both Lambert and Baptiste pointed out that the Prime Minister had erred since JTUM was not able to negotiate on behalf of WASA workers at all nor was the umbrella organization NATUC able to do so. They noted that the only way NATUC could intervene was if they were asked to by the majority recognised unions.