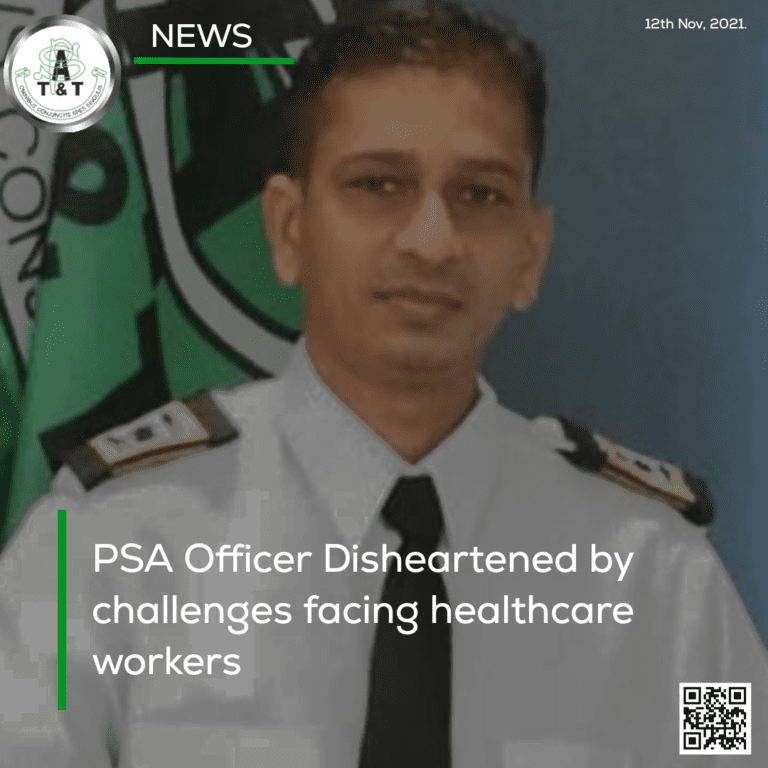 “The only thing healthcare workers have gotten over the two years of this pandemic is claps and applauses.”

That was the reaction of a visibly concerned Public Services Association(PSA) Industrial Relations Officer(IRO) who went on an impromptu visit to the San Fernando General Hospital about two Saturdays aback and after speaking to one nurse who he came to drop off some documents to end up going through several wards interviewing nurses as well as other staff at the institution.

Ricardo Goolcharan, in an interview with PSA media, said after he had spoken to several nurses and other healthcare providers at the hospital, whose grievances, he documented, he felt disheartened. On behalf of the health workers, he said, that he felt obligated to address their working conditions and arrangements and voice their concerns in writing.

The IRO Officer who has 31 years’ service said, one of the key issues facing the hospital was staff shortage, “And it was evident on the day that I visited.”

He noted that this did not only compromise the staff to patient ratio at the hospital but also meant, “All shift workers are being asked to increase their working hours and ignore the fact that PSA has a signed memorandum with the Ministry of Health and the RHAs in Trinidad dated 27th March 2015 which specifically addresses hours of work.”

He continued by saying that the staff shortage also affected workers on a public holiday or those who came out on their off day since it was difficult to give the employee back their day owed during the six-week period as was the customary practice. He also noted that workers stood to lose the only solace they had which was the rest day and that was because of the increase in working hours.

In addition, Goolcharan made the point that all the issues coming from the South West Regional Health Authority(SWRHA) were not based on staff shortages and financial compensation, but there were also some Occupational, Safety, and Health problems that needed to be dealt with. He said the challenges that needed to be addressed ranged from the simple to the complex and exampled the lack of gloves for workers and pampers for patients as simple fixes. He also noted that he was told that although there is a parallel healthcare system, there were still Covid-19 patients housed in the teaching hospital.

“In the teaching hospital there is something called isolation rooms with negative pressure, but in the isolation room with negative pressure, some are not functional and you ought only to have a capacity of two patients at a time. So, ideally, if you have a patient such as a Covid patient, now what they did with Covid is put positive Covid patients into rooms of four and five and this is now central air condition and not the negative barrier that I was referring to. So, everyone inside that building may be compromised. Everything is circulating.” He explained.

Another contention that some hospital staff voiced to Goolcharan according to him was the prob of having patients who needed specialised care such as patients with neurological complications being housed on wards. This despite the ribbon cutting ceremony that took place in 2019 commemorating the opening of the neuro surgical ward. He reasoned that putting patients who needed specialised care on wards robbed them of the expertise and care they needed.

One other issue that he said came up consistently among the staff members that he spoke to was the compromised bed spaces on the wards.

Goolcharan noted that he had sent an email to Brian Amour’s Chief Executive Officer of the SWRHA last week Thursday but as of this morning he had not received a reply.