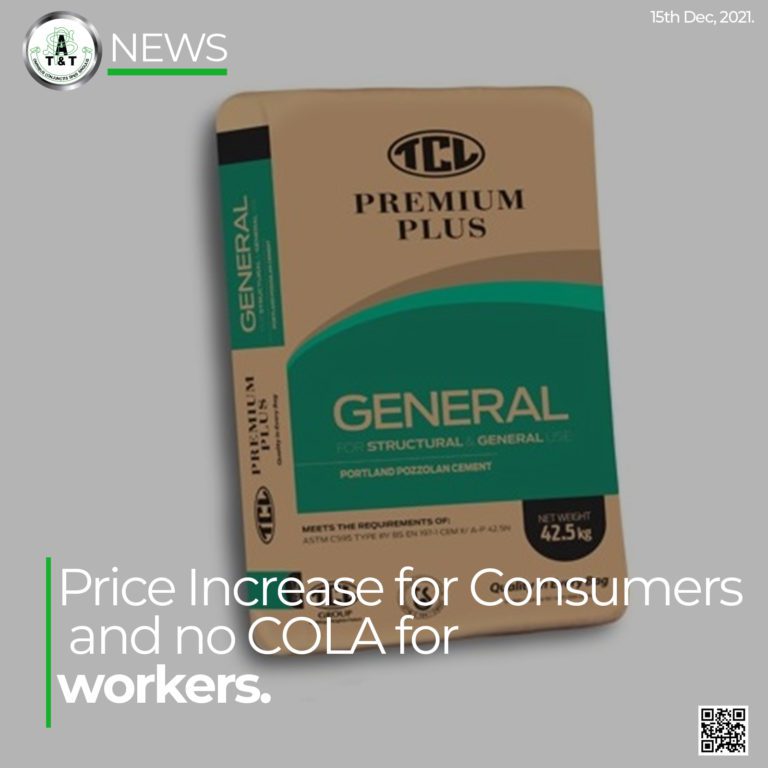 On the very day that Trinidad Cement Limited’s(TCL) has set for the start of their 15% hike in the price of premium cement, they have also broken a promise to their staff that they would pay a cost of living allowance(COLA.)

Yesterday workers of the company downed tools and stood outside the company’s Claxton Bay headquarters while the rained poured overhead. Workers said they were seeking answers from a senior manager as to why management had not carried through with the agreement to pay workers their COLA that was due from 2014 to 2021. The COLA was set to benefit about 200 current, retrenched, and retired employees.

Kevin Arjoon,  OWTU branch president for the TCL workers, in speaking to reporters stated that the company, which is majority-owned by Mexico’s Cemex group had stated to workers about two weeks ago that they were ready and willing to pay the COLA on December 20. However, he said, at that time the TCL’s management informed that they simply had to finalise discussions with the Oilfield and Workers Trade Union(OWTU) before the monies owed reached into the hands of workers.

Arjoon noted that coming out of a management meeting with OWTU on Monday, workers were again told that TCL would not pay the COLA as was first arranged.

He insisted that the employees were not protesting nor were they refusing to work, but simply wanted to know the reason for the company’s change of direction in a matter of weeks. He noted that the employees have not decided what would be their next step if their request for information was not met.

A price increase by TCL is set to effect the market on December 20. According to the company, “The main attributing cost factors are natural gas, imported spares and other raw materials that go into the manufacturing the highest quality cement brands, which you represent. It went on to say: “We assure you that, in the interest of protecting the vulnerable construction sector, our price adjustment is only a marginal increase when compared to the escalating operating expenses with which we are faced.”

The Mexican majority-owned TCL once again became a monopoly in Trinidad and Tobago after Rock Hard Distributors Limited had called off its operations after losing a lawsuit in September of this year. The lawsuit was brought against the Trade Ministry who Rock Hard accused of unfavorable business practices. Practices it claimed were aimed against the company which was a subsidiary of Barbadian cement maker Rock Hard Cement. The hydraulic cement is manufactured by Sonmez Cimento in Turkey and is consigned to distributors regionally.