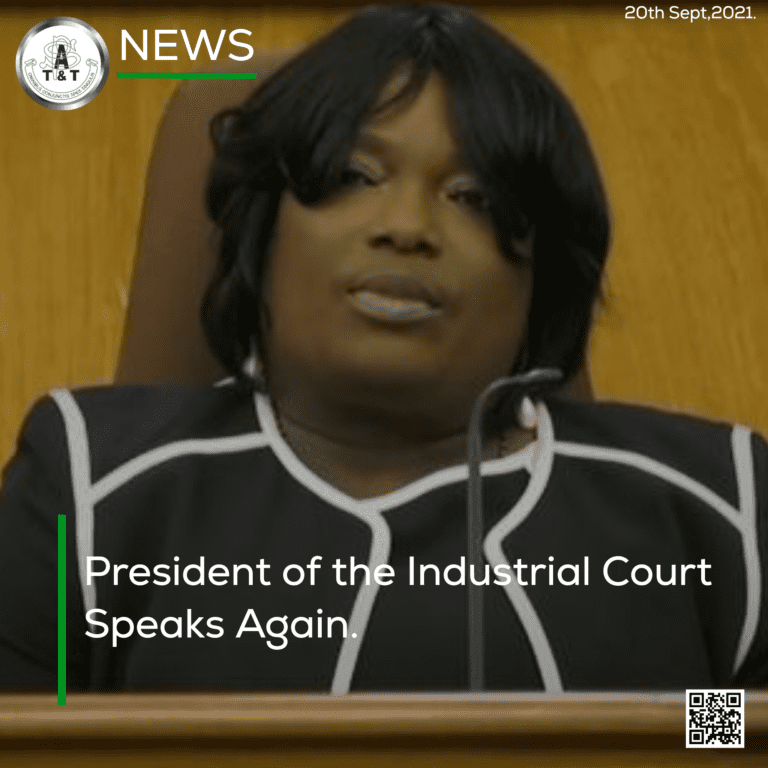 A woman who has been locked out of the workplace since the first day in September because she refused to take the Covid-19 vaccine or supply a PCR or antigen test every two weeks has told PSA media that the statements made by the Industrial Court’s President, Deborah Thomas-Felixon Friday opening of the law term came as no surprise to her.

According to the employee who did not want to be identified, she said it was what her representative at the Public Services Association(PSA) had told her already. However, she said that she was happy that the statements were repeated by the Industrial court’s President since the company she worked for had not changed its stance on mandatory vaccination up to yesterday when she was invited to an arrangement between her company and another Association. She said while there they had doctors address any concerns the unvaccinated workers had and there was a nurse on standby. She said she found that sort of “spooky.” However, she said she refused because she still was not ready to take the vaccine.

She explained that Thomas-Felix’s statements made her hopeful that the disagreement between the company’s management and a few employees of which she is one will not have to reach the courts and she could return to work soon. At present, the employee said she is simply going to work to sign the register and return home because she is not allowed on the compound. That routine she said had been ongoing since there was an escalation in the Covid-19 policy at the workplace in September.

Before September the employee who has close to one year’s service at the company in East Trinidad stated that the management of the company engaged in workplace segregation where unvaccinated employees were allowed to work but were told they could not use the same lunchroom, toilet, washroom, and cooler as the vaccinated employees.

Yesterday, Thomas-Felix while delivering her annual speech, made it clear that consultation was necessary before implementing a mandatory vaccination policy on existing employees. She however said that employers are permitted to introduce a vaccination policy for new employees. She said: “In other words, can such a policy be introduced unilaterally by employers in the workplace? The short answer to that question is no.” However, this is not the first time the Industrial Court’s President had spoken on the issue.

In February, Thomas-Felix had shared a similar sentiment during a webinar focused on best practices in industrial relations. In that seminar, she had reminded employers that one of the practices of good industrial relations is that they must not unilaterally alter terms and conditions of employment. However, since February several well-established companies and organisations have either denied their unvaccinated employees access to the workplace altogether or demand that they pay for a PCR test every two weeks.

PSA President, Watson Duke has been one of the most vocal advocates against employers mandating a mandatory vaccination policy at the workplace. On his Facebook Live videos, he has also advised workers on their rights in the issue.