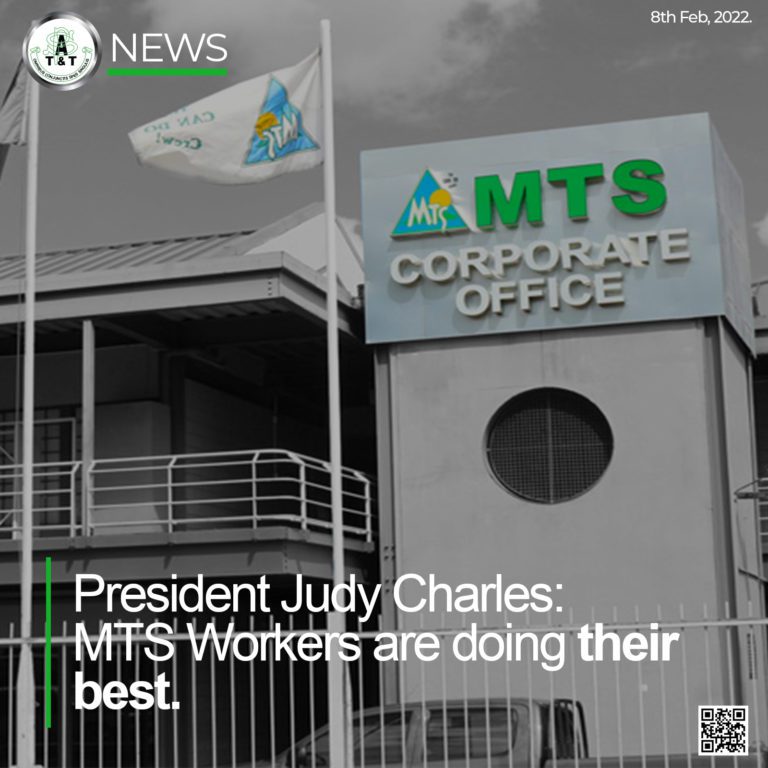 While the National Training and Security Company Limited(MTS) workers are frustrated, upset, and complain bitterly, they are still doing their jobs.

That was the perspective put forward by Judy Charles, President of the Transport and Industrial Workers Union who spoke to PSA Media on Tuesday and said that just Monday night she had stayed up late speaking to several MTS staff concerning some of the issues they were facing.

“MTS is one of the most professional companies I know.” She said.

Charles stated that she wanted the government to pay MTS their monies owned, so some of the challenges facing the company can be remedied.

She said that the ministry of education and other ministries wanted MTS workers to sanitise classrooms and buildings every hour but the union, “Had to shut that down since it was not in the workers’ job specs.” She added that the union has instead instructed staff to sanitise two times per day.

To further her point Charles reasoned that what they wanted was impossible since MTS staff was supposed to be cleaning classrooms while classes were in progress since one of the breaks was only about 10 to 15 mins. She also noted that they had recommended to the company to purchase mist blower guns to make it easier but because of the company’s financial constraints it never happened.

Meanwhile, Charles also pointed out to PSA Media that one of the major challenges facing the MTS workers is that they are short-staffed because of the quarantine protocols that they must adhere to during the Covid-19 pandemic.

During a virtual sitting of the State Enterprises Committee of Parliament on January 31, MTS human resources manager Alana Hosein and CEO Lennox Rattansingh commented that since the start of the covid19 pandemic in March 2020, MTS had lost 25 workers to Covid-19. However, according to President Charles, the number of workers who had died was much higher. She said the situation was compounded by the fact that workers were doing their jobs without personal protective equipment(PPE).

“No face mask, aprons to put over their clothes, gloves, or eye-goggles.” She added. “Workers are facing the same pandemic as everyone else and are going through the same struggles to stay safe.”

Also stated during that virtual meeting was that MTS was owed over 600 million by government ministries and state agencies. The debt has been outstanding for several years and has been not paid under different administrations.

While the Ministry of Education was credited as the biggest debtor with 300 million dollars owed, other ministries were also culpable. Most notably according to MTS CEO Lennox Rattansingh were the Judiciary, police service, Housing Ministry, and Sports Ministry.