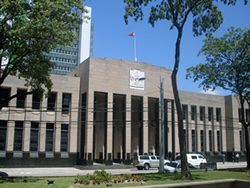 week after employees at the Treasury Division were mandated to work in rotations that breached the fifty percent capacity, an employee reportedly tested positive for the Covid-19 virus, while another employee is now reportedly showing symptoms of the virus.

This morning via phone interview, Chairman of the Joint Consultative Committee (JCC), Darren Ali, confirmed the positive covid-19 case. According to Ali, had management engaged the Union Representative in their rostering decisions, this could have been prevented. He stated that management had continued to ignore the Union Representative, which now put employees at risk.

“The rotation system implemented by management is poor! This could unfortunately be the start of a super spread at the treasury. If they have consulted the union, there would not have been a confirmed case.“ said Ali.

He stated that he understood that management will need to put certain things in place as its the closing of the financial year, however, he said, it must not be at the detriment of the employees.

“The union understands their concerns but saving lives is critical.”

He further stated that management’s approach to keep the positive case quiet would only pose further risks, as according to him; employees would be able to better protect themselves, if they knew. As such, Ali requested open dialogue with management when decisions had to be made, especially during the pandemic. He said that despite the challenges, staff continued to work and needed to be best protected.

“Why they are hiding? The hide n seek thing, we don’t want that, if you come out and let people know, persons would take more precautions to protect themselves”

Ali informed that he engaged in conversation with the Acting Comptroller, Naliesha Bally, who ensured that an emergency meeting would be held with management, to ensure that the spread of the virus is mitigated.

The workers employed at the Division had last week reported to the PSA that they were fearful of a possible mass Covid-19 outbreak. They had expressed their concerns and dissatisfaction for what they called, “a lack of common sense” by the Treasury’s higher management, as according to staff; the Treasury Division has on average 400 employees when operating at full capacity.