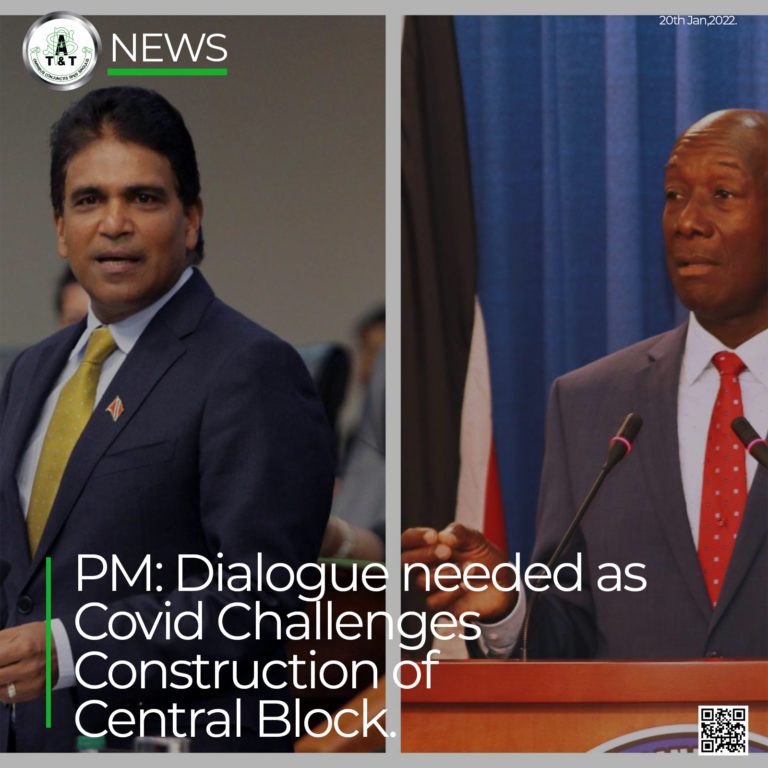 Despite its many challenges and setbacks, including a threat by the contractor to terminate the project, the construction of the Central Block of the Port-of-Spain General Hospital will be continued.

The disclosure was made in the lower house on Wednesday when Prime Minister, Dr. Keith Rowley gave an update to a question posed to him by Caroni East, Member of Parliament(MP), Dr. Rishad Seecharan.

“As a result of issues related to the Covid-19 pandemic, not the least of which is the global supply chain issue that we are all familiar with. And the global health responses which resulted in the successive shutdown of construction.” Dr. Rowley answered his colleague telling him that there was indeed a stall in the project that was supposed to be completed by 2023.

Dr. Rowley went further and admitted to the parliament that several more differences and issues had arisen between the state-owned Urban Development Corporation of Trinidad and Tobago(Udecott) and Shanghai Construction on the project. However, he claimed, “There are discussions and negotiations on the way and those should see some sort of resolution to the challenges that arose as a result of the differences that I just mentioned.” He continued by noting that what was being discussed presently was the impact of the loss of time and the cost of operations after the challenges and setbacks were created by the Covid-19 pandemic.

When asked by Oropouche East MP, Dr. Roodal Moonilal to confirm whether or not Shanghai Construction had indeed terminated the contractual agreement with Udecott and the government, Dr. Rowley replied: “I am aware that some threats were laid but I am not sure if in fact the threats were carried out. The contractor was threatening to terminate and Udecott had no difficulty with that because Udecott is protected by contractual arrangements.” However, Dr. Rowley reiterated the point that there were continued discussions between both parties.

Nevertheless, Dr. Moonilal continued pressing on Dr. Rowley that the disagreement between Shanghai Construction and the state-owned company was over money. Dr. Rowley responded: “If what you’re implying is the claim that the contractor is making for payments, I am saying that it is that kind of involvement that is generating the issue between UdeCoTT and the contractor. If you’re asking as to what has been paid under the contract at face value then I’m not in a position to tell you that now.”

To the question of the percentage of work completed on the Central Block before the threats to terminate were made by Shanghai Construction and the monies owed to the company, Dr. Rowley asked that MP Moonilal lodge his questions through the relevant channel and it would be answered appropriately.

Since May 2019 the government had signed a 1.1 billion dollar contract with Chinese firm Shanghai Construction (Caribbean) Group Limited for the reconstruction of the Central Block. The 13 storey New Block will include a 540-bed tower, a coronary unit, a 6-bed plastic surgery unit and provide medical, psychiatric, pediatric, and ancillary services. This billion-dollar facility will replace the old block that was built in 1962.

Speaking at the signing of the billion-dollar contract deal in May 2019, Health Minister Terrence Deyalsingh said the rebuilding of the Central Block was long overdue. At the time he had divulged that a 2009 assessment of the building determined that it was engineeringly unsound.