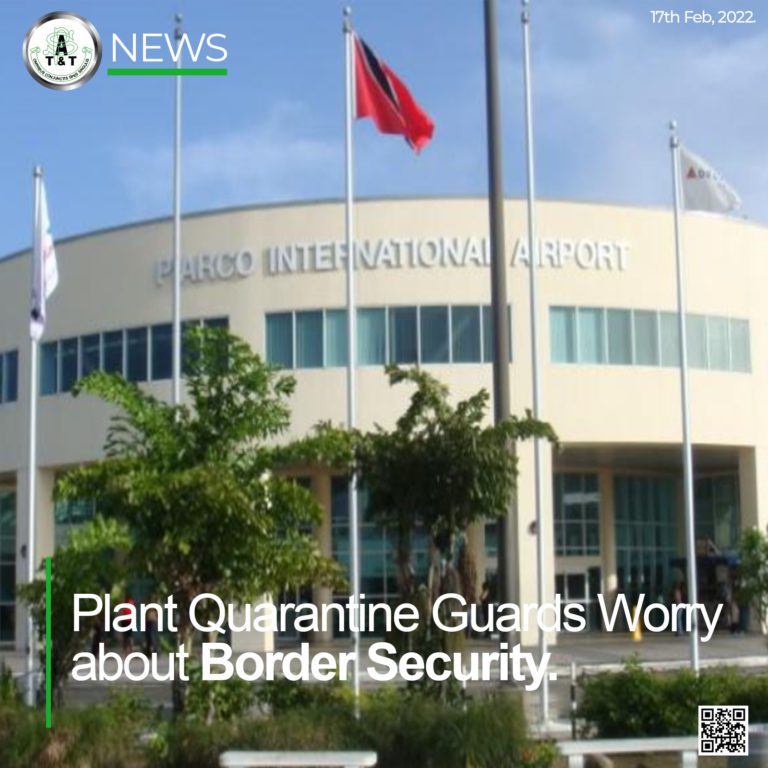 Frustrated Plant Quarantine Guards are warning that there would have been a lot more illegal items entering different ports of entry in recent times.

In a conversation with PSA Media yesterday, the spokesman for the 12 guards who have not been on active duty for the past two years said, “Plant Quarantine is the additional eyes for border security and plays an active role in its protection.” He continued, “But when people are seeing that plant quarantine are not present and are not doing what they are supposed to be doing, then it is a clear giveaway to the importers to do whatsoever they want. Meaning that drugs, guns, and other contrabands could easily be slipped into food items and agricultural items.”

The spokesman was asked to comment on the 1.70 kg marijuana seizure made by the Customs and Excise Division at Piarco International Airport last Friday. The drugs which had a street value of $339,592 were concealed in boxes of foodstuff at a Caribbean Airlines bond(Secured area where goods are kept).

The guard noted that usually there would be three shifts working at the airport. A 7 am to 3 pm, 3 pm to 11 pm and an 11 pm to 7 am shift. According to him, usually, those shifts had two Plant Quarantine Guards and an Agricultural Assistant present, and Customs would inform Plant Quarantine that there are agriculture and food items present and that inspection was needed.

However, he pointed out that presently two shifts are working at the airport. An 8 am to 4 pm and a 4 pm to 12 midnight. In addition, he noted, in recent times there has been only one Agricultural Assistant present on these shifts since the 12 Plant Quarantine Guards have been told to remain at the Centeno Research Centre to do other functions that are not on their job specifications.

When asked which port of entry might be the most suspect for illegal items, the spokesperson said Queen’s Wharf in Port of Spain. “The reason being, we import a lot of provisions from the islands and presently there are no checks and balances on Queen’s Wharf. Most of the time you have two Agricultural Assistants and they are going down the road with a tablet. It seems management expects the tablets to do the physical inspections. Not only to look for contraband but also to ensure that the produce meets the recommended standards.” He said in the past it is through physical inspections that they have picked up on contraband, meaning, “Alcohol, cigarettes, marijuana, money and wild meat.” He noted that while Customs and Excise are also present on the site, Plant Quarantine Guards are usually the ones to do the initial inspection.

“In the past, normally the Plant Quarantine Guards together with the 25 Agricultural Assistants would turn the port upside-down. We were not only looking for pests and diseases but we were also protecting our borders,” he said.

However, he noted that if Plant Quarantine Guards were allowed to be at the Cedros port he thinks that they would find a lot of contraband also. “That Cedros port is very active at this point in time,” he said.

When PSA Media contacted public services association(PSA) Industrial Relations Officer(IRO), Ricardo Goolcharan on the status of the guards returning to duty manning the ports he said that he has written to the Permanent Secretary at the Ministry of Agriculture, Land, and Fisheries to have a meeting and is awaiting a response.

An update on this situation will be given in the future.