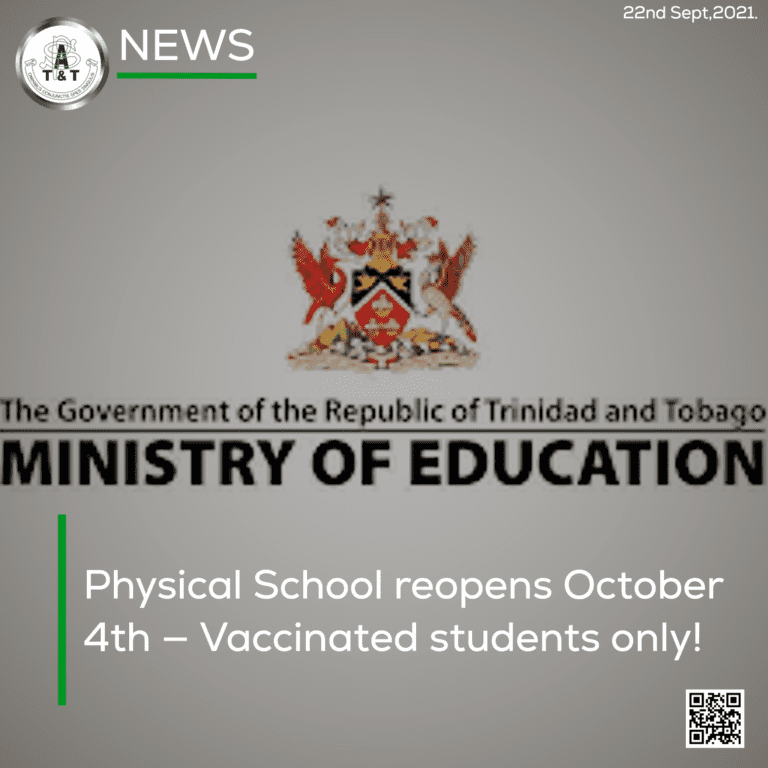 Physical classes are set to resume on October 4 for all vaccinated secondary school students, classed in Forms Four, Five and Six for both teaching and practical sessions. The Ministry of Education’s (M.O.E) Corporate Communications Unit, via press release, announced this earlier today. This pronouncement came despite the CMO alluding to the possibility of community Covid-19 Delta variant spread.

The release stated that reopening guidelines would be provided for principals in the upcoming week and arrangements to facilitate both teaching and learning at the institutions are ongoing. According to the release, come October 4th, teachers and fully vaccinated students of this cohort would be expected to report for physical classes.

The Trinidad and Tobago Unified Teachers Association (TTUTA) slammed the press release, referring to the proposed approach by the M.O.E, as a logistical nightmare for educators. TTUTA, in response to the release, called out the disrespect for proper communication channels and highlighted the blatant disregard for the well being of all education professionals. TTUTA’s release further condemned the M.O.E for what the union referred to, as ‘only lip service’ by the Minister regarding the preservation and welfare of both teachers and students. TTUTA thereby called on the Ministry of Education to engage in the usage of proper communication channels and appropriate written instructions to inform education professionals on the reopening of schools on October 4.

Speaking to PSA Media, Second Vice President (SVP) of the Public Services Association (PSA), Avinash Maharajh, stated that the reopening of physical classes for only vaccinated students of Forms Four, Five and Six is very troubling. He questioned if unvaccinated children would be denied their basic human right to an education, as the release made no mention of unvaccinated children. He questioned too if this was the start of mandatory vaccinations for all and reiterated that this type of discrimination was unacceptable.

“Parents have genuine concerns about the safety of the vaccines for their children, particularly in light of stories of children being hospitalized after receiving the vaccine. This type of segregation cannot be endorsed and must be forcibly condemned by the populace!” said SVP Maharajh.

Maharajh went on to highlight and question what parents of minor children were to do, as neither the Ministry, nor the Government had offered any viable solution for parents, after shelving the pandemic leave that was agreed between the PSA and the CPO.

“I wish that our leaders can be more prudent in their decision making. If staff is out 100% and not on rotation, if and when someone contracts the virus they will spread it to all the staff members since there is little to no social distancing and essentially shut down the school. Whereas, if staff is on rotation there can still be continuity of operations.”

President of the Concerned Parent Movement of Trinidad and Tobago, Mr. Clarence Mendoza, when called for comment, has indicated that at this time, they are treating with the release as fake news, as according to Mr. Mendoza, the circulated release is neither signed off by the Minister of Education, nor the Chief Education Officer.

Trinidad and Tobago’s neighboring island Guyana, has been forced to shut down 17 schools within the past two weeks, following Guyana’s reopening of schools.