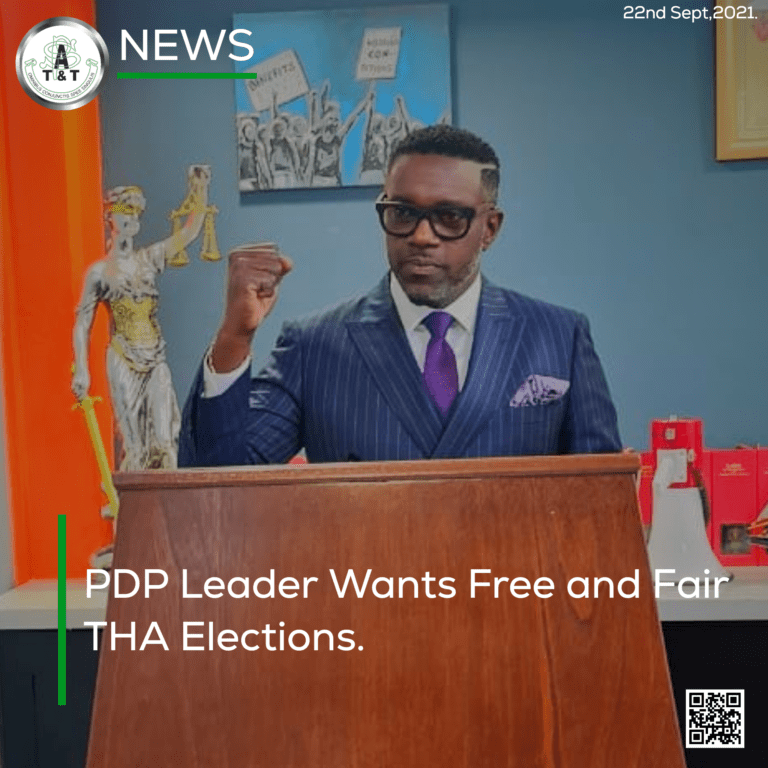 The Political Leader of the Progressive Democratic Patriots(PDP) is determined to have his request asking for international observers for the Tobago House of Assembly(THA) elections acknowledged by Prime Minister, Dr. Keith Rowley before the date of the elections is announced.

In a Whatsapp video that was later uploaded to his Facebook page yesterday, Duke said that he has tried to deliver his message using several methods, including, sending it to the Prime Minister’s email address, but he said that the message was not delivered, “It bounced back.”

He also told viewers that he had it sent to Dr. Rowley’s assistant, and also via a Whatsapp message. The PDP leader divulged that the message was also hand delivered on Monday, but no reply had been presented by the Prime Minister’s office. However, he noted that President, Paula Mae Weekes had replied stating that she had received the letter which asked for the Prime Minister to provide Independent International election observers.

The PDP leader said that this is not the first time that he had requested international observers to be present at the THA elections, and pointed to last September before the January 25 elections when he requested the same. He said that his request at that time was ignored.

In the video, the PDP leader said that he had no problem losing the yet-to-be-announced THA elections, but wants the Prime Minister to ensure that the victory is not overshadowed by any appearance of dishonesty on the Peoples National Movement’s part.

Duke made it clear: “The elections are a minimum two to three months away, it’s more than sufficient time for independent observers to come in.”

He went on to say that the Tobago people would not take lightly to any discrepancies in the electoral process that would make the PNM victorious and therefore he is requesting that the Prime Minister, “Write to Caricom, write to the European Union, write to the organisation of American states, write to the Carter Centre, write to international observers and invite them to come to Trinidad and Tobago. In particular Tobago. In the upcoming Tobago House of Assembly elections.”

According to Duke, the upcoming elections would be very close. He reminded viewers that the last THA elections ended in a six-six deadlock, but three more seats were added this time around. He pointed out that with the changing of the polling stations there could be some confusion in the minds of the voters and therein an opportunity for someone to employ underhand tactics to steal votes and therefore the elections.

Already controversy has emerged in the THA elections with the chiseling of three seats in West Tobago, an area, which has traditionally favoured the PNM. Political pundits and dilettantes alike have argued the independence of the Elections and Boundaries Commission(EBC). Despite this, the leadership of the PDP has said that they would allow Tobagonians to decide the elections with their fingers