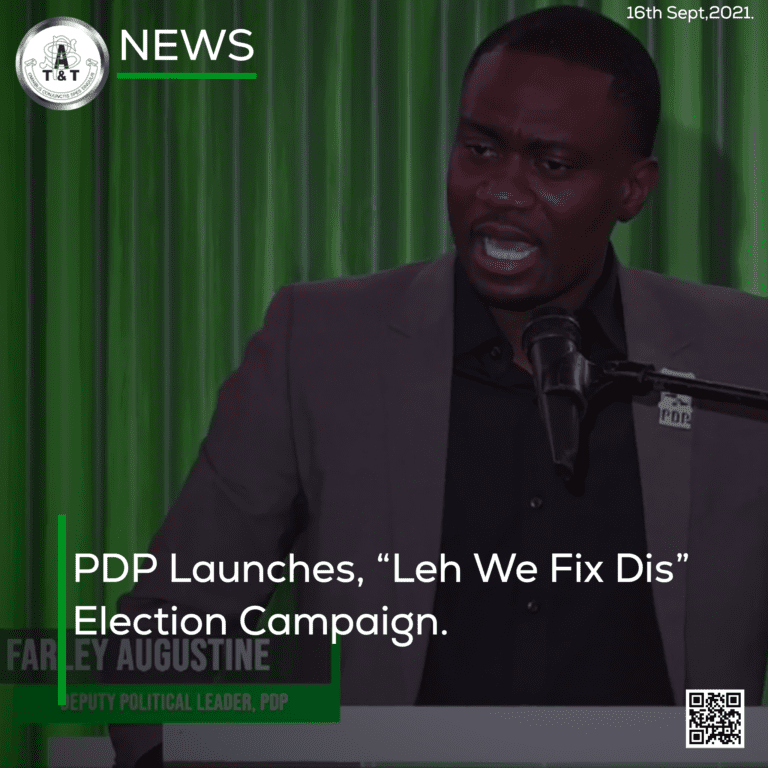 The Progressive Democratic Patriots(PDP) has signaled its intent to take governance of Tobago, whenever Prime Minister,  Dr. Keith Rowley decides to call the Tobago House of Assembly(THA) elections,

At the party’s election campaign launch, which followed strict Covid-19 protocols last night, Deputy Political Leader, Farley Augustine told an attentive audience that despite the EBC rearranging the boundaries to favor the Peoples National Movement(PNM) the PDP will still be victorious. He said, “They can twist the seats up, they can twist the seats down. They can pull from one, they can pull from the next. They could thief from here, they could borrow from there. They could make the people in Mason Hall vote quite with the people in Bagatelle. They could do what they want, their cut-tail is booked.”

The Deputy political leader said at the forefront of the PDP’s, “Leh We Fix Dis” campaign is Tobago’s self-autonomy and Tobago for Tobagonians first. He said there were some things about Tobago that he was not willing to negotiate on and disclosed that Tobago’s border and land were examples of two of those principles. Augustine acknowledged that he was no longer going to waste time with the PNM councilors in the THA. He advised the Tobago electorate to vote against persons who were not willing to vote for their self-autonomy and the betterment of Tobago.

Augustine was introduced by the Political Leader, Watson Duke as a spiritual and orderly man with the capacity to solve the “bread and butter” issues facing Tobagonians. Augustine pointed out to PDP supporters that when he uses the “Leh We Fix Dis” term he is not excluding those persons who adhere to the PNM philosophy.

“The truth is I will not lead a team that will become PNM part two. That will not happen under my watch.” He said. He informed persons who might still vote for the PNM that the PDP will form a THA that would not exclude them. And advised PDP Spartans by saying: “It is not your job to run anybody. Is not your job to cuss anybody. Not because you know who they vote for you must cuss them.” He said it must be understood that behavior does not represent the PDP and encouraged persons who may vote for the PNM to come aboard and help fix the problems facing Tobago.

Another candidate who spoke at the campaign launch that was streamed live on the PDP Political Leader, Watson Duke’s Facebook page, and Tobago channel 5 was Joel Sampson who intends to represent the electoral district of Bon Accord/Crown Point. According to Sampson, one of the issues that have bothered him most over the past year has been the acquisition of land for airport expansion. He explained: “Persons who have their generational lands, have had these lands being taken away from them without any proper forms of negotiations.” Sampson said those persons had been lied to and echoed the “Leh we fix Dis” slogan that had been popularised.

The Deputy Political Leader, Farley Augustine pointed out during his presentation, after the January 25 deadlock between the PNM and the PDP that they had tried working with their counterparts from PNM for Tobago’s self-autonomy but there were too many concessions to be made and the PNM assemblymen were not willing to work to make it better for Tobagonians.