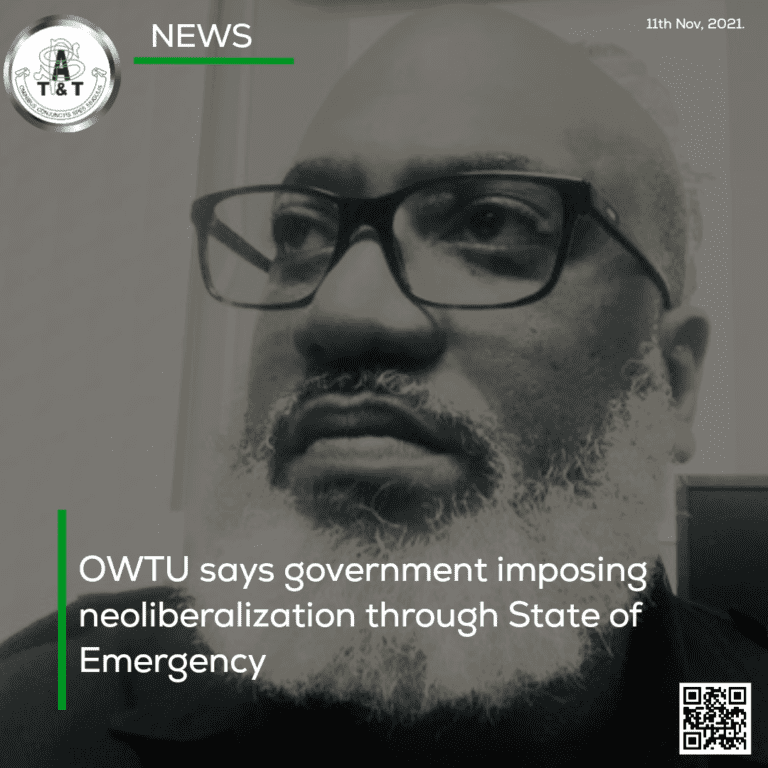 With the risks connected to climate change mounting, the pathways to a low carbon, socially just transition and a more climate-resilient future, are emerging. Alongside global action, this transition will also bring resilience to the impacts of climate change on the Caribbean.

But Chief Education and Research Officer of the Oilfield Workers Trade Union Ozzi Warrick said government is instead attempting to neoliberalize the country.

“The government is attempting to impose this transition on the population in the pandemic,” he said. The transition? A shift to a green economy.

This will see measures being implemented by the government to reduce greenhouse emissions such as the establishment of a solar utility and promoting a transition to Electric Vehicles as a low carbon alternative to liquid transportation fuels.

Warrick was giving his contribution to an online discussion on social dialogue and democracy held by the Trinidad and Tobago extractive industries transparency initiative.

Noting that between 2015 and 2019 over 30,000 persons would have lost their jobs, Warrick said the reskilling and capacity building mentioned by Prime Minister Dr. Keith Rowley at the COP26 Summit in Glasgow, Scotland last week, that would come with this transition, was never revealed to or discussed with members of the public.

Warrick then explained that he believes the government is attempting to package this as a just transition when it is really the advancement of further privatization and liberalization of the country.

“We are in fact, right now, we are experiencing structural adjustment programs based on the government’s neoliberalization ideology. That is what is happening,” Warrick added.

He went on to say that the State of Emergency is being used to restrict mass action against what is their unjust transition and noted that,” We will truly never never realise who we are because we are right back in the clutches of multinational coorporations.”

Just Transition is a vision-led, unifying and place-based set of principles, processes, and practices that build economic and political power to shift from an extractive economy to a regenerative economy. The transition itself must be just and equitable; if the process of transition is not just, the outcome will never be. These strategies were first forged by labor unions and environmental justice groups, who saw the need to phase out the industries that were harming workers, community health, and the planet; and at the same time provide just pathways for workers to transition to other jobs.

Mr. Warrick made it clear that the OWTU is prepared to fight going forward, and do whatever it takes to never go back to new forms of neo-liberalization.

Red growth is what he said the union will be fighting for.

“It means growth that is people-centered, driven by the indigenous capacity of drawing on the imagination from ourselves as a people and not be caught up with the ideas of allowing multinationals to once again retake the ownership of energy,” Warrick clamored.