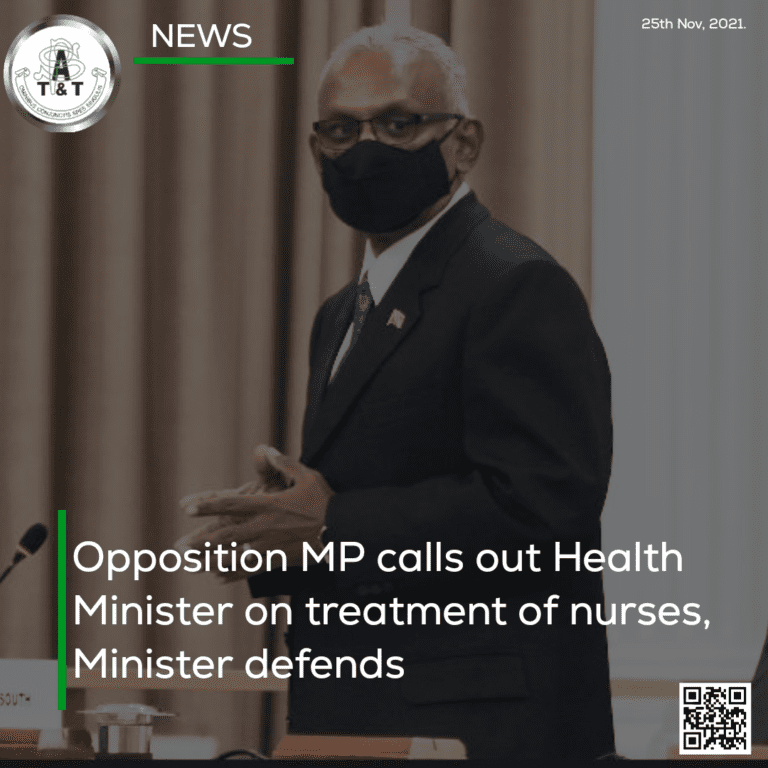 Opposition MP for Couva South Rudranath Indarsingh is standing in solidarity with Industrial Relations Officer with the Public Service Association Ricardo Goolcharan who stood with his hands shackled outside the San Fernando General Hospital on Monday, in protest action against the plight of staff in the general health care system, which he said, is being ignored.

The one-man protest was shut down by police as Goolcharan pleaded with the hospital’s management to acknowledge that staff are “burnt out, tired and frustrated.”

He addressed issues such as the nurse-to-patient ratio in the parallel healthcare system, gruesomely long work hours, and nurses being dispatched to covid-19 centers without notice.

MP Indarsingh in a press release on Tuesday said that Health Minister Terrence Deyalsingh seems to turn a blind and tearless eye towards the plight of healthcare professionals while adding that one day of rest cannot compensate for the difficult and risky jobs being performed by medical personnel.

During Wednesday’s Ministry of health media briefing, the minister took the opportunity to defend the government’s handling of nurses. He explained that these are not normal times and as such, they have implemented electronic monitoring systems to assist with human resources.

“And that is one way in a pandemic when things are not ideal, you still maintain an optimal level of care, and we did that proactively,’ he said.

He further noted, “We trained since last year, about 200 nurses in ICU management, we brought in about 25 ICU nurses from Cuba, and the fresher ICU nurses who have been trained and are doing their practicals are always paired with a more experienced person. So no patient is under the control of an inexperienced team.”

Acknowledging the mental and psycho-social effects on healthcare workers and the strategies in place, Minister Deyalsingh said, “We implored strategies like transportation, meals, time off and other strategies to ease the strain but as this vaccine strikes more and more we have always been concerned about the physical and mental well being of our healthcare workers.”

He commended his Ministry as well as the Regional Health Authorities on the support given to these workers but noted that the missing ingredient is the concern for healthcare workers by members of the public.

According to him, those not wanting to be vaccinated can assist nurses in their plight by adhering to the current public health regulations.