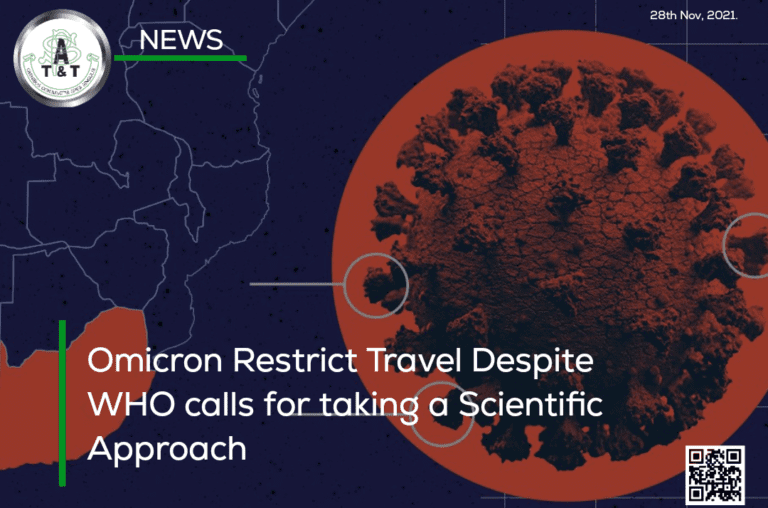 Hours after the World Health Organisation(WHO), Technical Advisory Group had declared Omicron, the latest Covid-19 variant as, “A variant of concern,” Trinidad and Tobago joined a growing list of countries to impose a travel ban on several Southern African countries.

However, although the USA has already imposed travel restrictions on the African countries that the new strain has been detected, those restrictions are set to begin on Monday. In addition, the variant has already been identified outside of the African continent in Hong Kong and Israel, and officials from several countries have warned that the variant may already have spread undetected to other countries.

A media release from the Health Ministry last night followed the same measures taken around the world in the United Kingdom(UK), United States(USA), and the European Union(EU), Japan, India, Iran, and Brazil.

In the Caribbean Trinidad and Tobago together with Antigua and Barbuda and Grenada had issued their travel restrictions before midnight on November 26.

Many more nations will be expected to follow despite the WHO advising countries against imposing hasty travel restrictions.

According to the WHO, world leaders should look to a risk-based assessment and scientific approach saying it would take a few weeks to understand the impact of the new variant, as scientists were working to determine how transmissible it was.

As made clear by the Health Ministry’s media release, persons who are not citizens or permanent residents of Trinidad and Tobago and those who visited several Southern African countries in the past 14 days of their arrival to Trinidad and Tobago will not be allowed entry.

Citizens and those with a permanent resident status will be allowed entry but will have to undertake a 14-day mandatory state-supervised quarantine.

According to the WHO advisory panel that convened yesterday, the early evidence states that the new B.1.1529 variant which they have dubbed Omicron, after a letter in the Greek alphabet, seems set to pose more of an increased risk for reinfection than the other more highly transmissible strains.

The WHO advisory team also pointed out that the new variant has a collection of mutations. Those mutations according to the experts are worrisome because it increases the possibility that Omicron could bypass some of the protection that vaccines might offer.

Pfizer-BioNTech and Moderna, makers of rival messenger RNA vaccines, said they are ready to develop booster shots tailor-made for Omicron if evidence suggests that current vaccines don’t protect people from the variant.