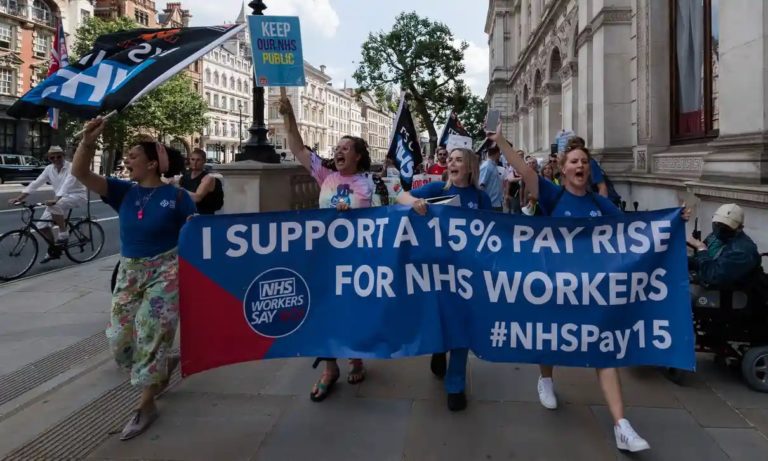 Pay for nurses and other NHS staff in England will have fallen in real terms by more than 7% since 2010, even if they accept the latest offer from the government, according to new analysis that will fuel rising anger about public sector pay deals.

Figures produced by the TUC show that remuneration for nurses, community nurses, medical secretaries, speech therapists, physiotherapists, paramedics and radiographers will have dropped by between 7.3% and 7.6% in real terms in just over a decade, even after factoring in the 3% rise offered last week.

The Royal College of Nursing, which represents 450,000 nurses, is to consult its members next month for their views on the offer and, if they are overwhelmingly negative, may proceed to an “indicative ballot”, opening up the possibility of some form of industrial action A senior RCN source said that while this was a remote possibility, it was “not completely off the table”.

Last week, unions representing teachers also reacted with fury after it was announced that pay for most of their members would be frozen, while the Police Federation of England and Wales said it no longer had confidence in the home secretary, Priti Patel, after she announced their pay would also be frozen.

The TUC general secretary, Frances O’Grady, told the Observer: “It’s easy to understand the anger from NHS staff when you see what’s been done to their pay. It’s not just about the 3% – it’s the way their wages have been held back year after year.

“All our key workers deserve a decent standard of living for their family. But too often their hard work does not pay. And after the hardest year of their working lives, they deserve better.