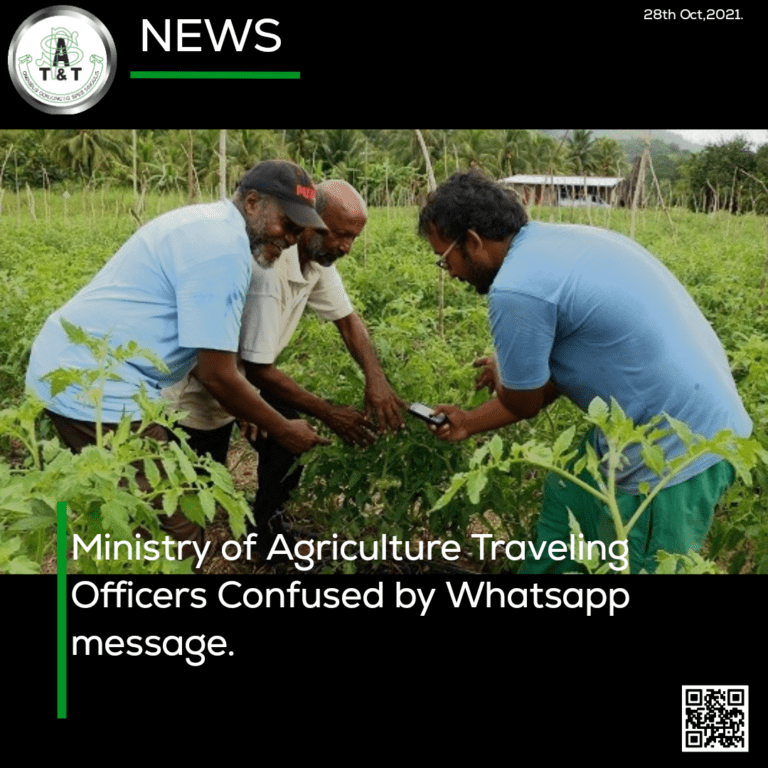 About 60 traveling Officers attached to the Regional Area North in the Ministry of Agriculture, Land, and Fisheries have been advised by the Public Services Association (PSA) to ignore a Whatsapp message that was sent to Officers instructing them to send their Farm Visit Forms to the Director of the region, Theresa Rosemond before they are to be paid their traveling allowances.

In the message, Rosemond forwarded to workers earlier this month, she stated: “Effective October 2021 and beyond all traveling expenses voucher-mileage claims must be submitted with copies of (a) weekly itineraries (b) completed farm visit forms, relevant signatures must be on the required documents as per chain of command.”

At least one worker and the chairperson of the PSA/Agricultural Officers Section considered the intent by the Director as micro-management since it has neither been the custom and practice nor part of the travelling allowance regulations nor is it in the Traveling Allowances act.

The chairperson when speaking to PSA media explained: “It will be a substantial change for those officers because it would mean that the Director is now going to have to go through every single officer’s traveling claim and that Director will have about 60 officers probably under their purview whose traveling is submitted every month and who will expect to be paid on a timely basis.

The Director who is the fifth person up the line will now want to see the confirmation of three people down the line.” However, the Director who used a Whatsapp message to inform the officers stated that the management strategy was based on the question and statements made in the Standing Finance Committee regarding transparency, accountability, and output-driven deliverables in the Parliament.

But according to the chairperson, this policy change was not initiated in the South region which has a different Director. She further pointed out: “If a Director is sending out a memo to officers it should have her signature and not on a Whatsapp message. It was not even a Whatsapp group. It was just sent to everyone. So it’s really an unofficial thing.”

Furthermore, the Chairperson noted that if the Director had the intention to change a policy that was longstanding in practice she needed to first consult with the union. She said: “It is a drastic change in the way things are submitted.”

One traveling officer who spoke to PSA media also suggested that Rosemond’s actions at micro-managing the North region stemmed from an issue with just one traveling officer’s Farm Visit Form. That officer noted that it was unfair that all others had to pay for the actions of one person. He agreed that it would be a big inconvenience for officers if the Director decided to go ahead with her decision and wondered if she had nothing else to do since the additional duty was a lot more work. However, he pointed out that other issues could compound the problem such as the lack of printing materials to get the relevant copies to her. He noted that in many sub offices there is no toner ink for printer neither any photocopying facilities to facilitates these submissions or even to assist the public in delivery of service.

He noted that the Director consistently operates in an autocratic, stubborn, unfair, and high-handed manner and said: “Most of the staff have expressed being bullied by her tactics. Staff is victimized by her when they complain.” He noted that there is an element of fear amongst staff because of her.

The PSA has written to the Permanent Secretary of the Ministry of Agriculture, Land, and Fisheries, Susan Shurland to retract the directions given by Director Rosemond. The affected officers were advised not to comply with this illegitimate instruction.