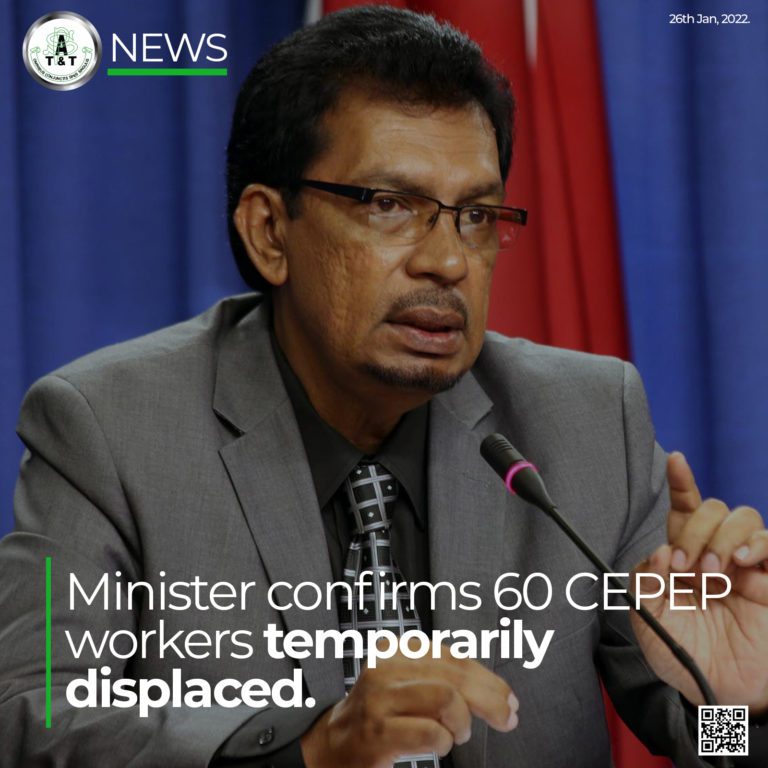 Both Couva South MP Rudranath Indarsingh and Oropouche East MP Roodal Moonilal have criticized the government amidst reports of CEPEP contractors being instructed to cut two-thirds of their staff.

According to reports, a letter dated January 12th and signed by CEPEP CEO Keith Eddy was sent to contractors requesting that the number of teams under each contractor be reduced from three to one, effective January 17. The contractors were given until January 14th to submit the list outlining the employees that will remain employed with the company. If not done, CEPEP said it will not be in a position to pay any of the workers.

In a statement on Monday, Mr. Indarsingh questioned whether this is a result of a cash flow issue within CEPEP or in the wider government itself. But at Tuesday’s sitting of the Senate, Local Government Minister Kazim Hosein confirmed that the teams of 3 contractors, comprising of 30 workers were cut to 10.

“This does not include the whole of CEPEP. This resulted in 60 workers being displaced. We expect as this happens with CEPEP from time to time, all 60 workers will be re-integrated into the program,” he explained.

Minister Hosein said that following an assessment, they gathered that redeployment was necessary to achieve equity around environmental work areas.

PSA media reached out to Mr. Indarsingh on Tuesday for further comments, prior to the Minister’s confirmation. He said, “I think that we need to know whether this is a policy decision by the government. Was this approved by the cabinet of Trinidad and Tobago? Or was it approved by the board of directors of the company?”

In his statement, while noting the socially and economically humble demographic that relies on CEPEP to put bread on their table, Indarsingh questioned what will be of these two-thirds of workers when they are forced into an already hemorrhaging economy to find work and support their families.

Indarsingh questioned, “Is there a cash flow problem existing that has forced this decision at CEPEP, or is there a cash flow problem existing within the level of the government of Trinidad and Tobago? If indeed this is so, the minister of finance, the Prime Minister, and the line minister need to come and say what is the current position as it relates to the future of CEPEP and the employees.”

Indarsingh described this move as a continuous attack on the working class as single parents will be directly affected and placed on the breadline. “I think it reeks of a sense of callousness and insensitivity on the part of this government to take this position.”

Recognizing that workers went forward and took the c0vid-19 vaccine to keep their jobs, Indarsingh said, “From day one you cannot trust this government, this government operates with a sense of insensitivity callousness and it has been anti-worker, anti-union and anti-people, so I expect nothing better.”

Meanwhile, Oropouche East MP Dr. Roodal Moonilal at the UNC’s Monday night meeting also described the move as insensitive while he claimed that much more than the Minister said, a whopping six thousand workers will be placed on the breadline.