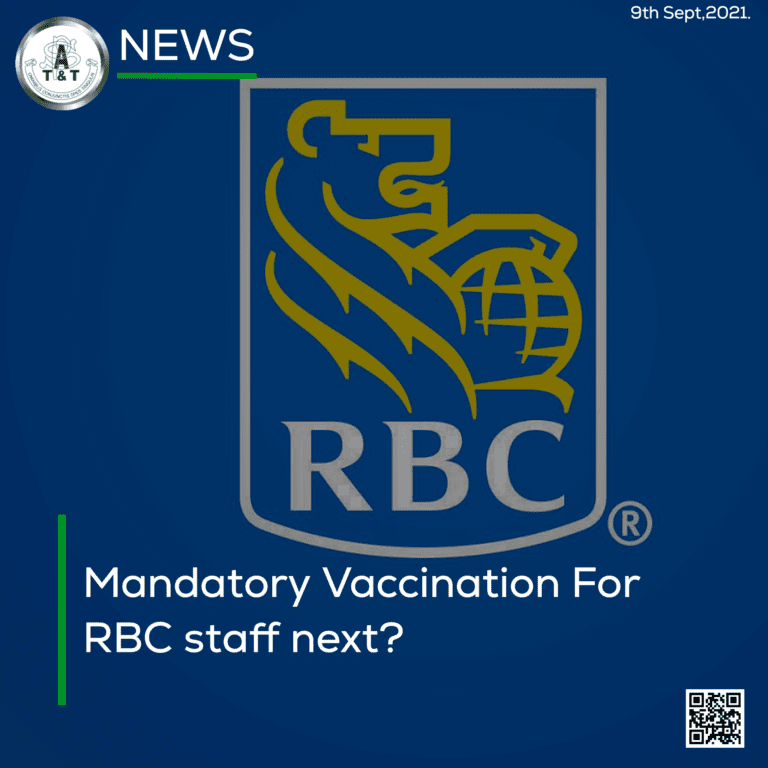 At present, employees working at the Royal Bank of Canada(RBC) in Trinidad and Tobago have not been pressured or even asked to declare their vaccination status by management. That is the assertion made by two employees of the company, who preferred not to give their names when speaking to PSA media yesterday. However, both employees acknowledged that the company’s policy can change in the coming days or weeks and this is despite the laisser-faire attitude many of the staff members, who are not vaccinated are displaying on the matter.

The employees cited a message posted two weeks ago, on the Linkedln page of the President and Chief Executive Officer(CEO) of RBC, Dave McKay indicating the bank’s position on the issue of vaccination for employees. In the post, McKay stated: “We believe vaccines are the best way to keep our workplaces safe and help our communities reduce the spread of Covid-19 variants such as Delta. That’s why RBC will be requiring all employees to be fully vaccinated to work on any of our premises, in regions where we are permitted to do so.” McKay also noted in the post that the mandate will begin in the U.S and Canada before it is expanded in the other 36 countries where RBC operates. In the case of the United States and Canada, the message states that those who can get vaccinated must do so by October 31.

Nonetheless, the two employees who we spoke to agreed with the company’s stance on mandatory vaccination for staff. They believed that the diversity of people that bank employees and especially their frontline workers such as bank-tellers deal with daily make them easily susceptible to contracting the virus. They said, “There has been a lot of outbreaks of Covid in the RBC branches and it has been kept hush, hush. Very private.” According to one of the employees, an entire branch had to be shut down at one point. She said: “Everyone got it, their family got it, their children got it. That should have been prevented. At the end of the day, we deal with customers full on. We are dealing with people’s cards, their IDs. We touch a lot of stuff.”

However, both employees noted that they and many of the employees at RBC are not unionised and therefore preferred to remain anonymous for fear of victimisation.

However, while conversing they admitted that a part of the problem at RBC was the sanitisation protocols that were not adhered to strictly at the two RBC branches, where both employees worked separately from the other. According to one of the employees: “Sometimes staff has to beg for hand sanitisers. We do not have that sort of thing that I see other banks doing. We do not have deep cleaning where people come to wipe down counters.” She did however note that employees were required to wear their facemask and this was thoroughly enforced at the branches.

Recently, it was reported in the daily newspapers that another bank, Republic bank limited had challenged the stance taken by the trade union representing workers on mandatory vaccination. In that case, the union said that they were not against vaccination but were encouraging proper industrial relations practices to be adhered to before RBL began initiating mandatory PCR tests for unvaccinated workers, threats of disciplinary actions, and monetary “bribes” to encourage workers to take the jab against their will.