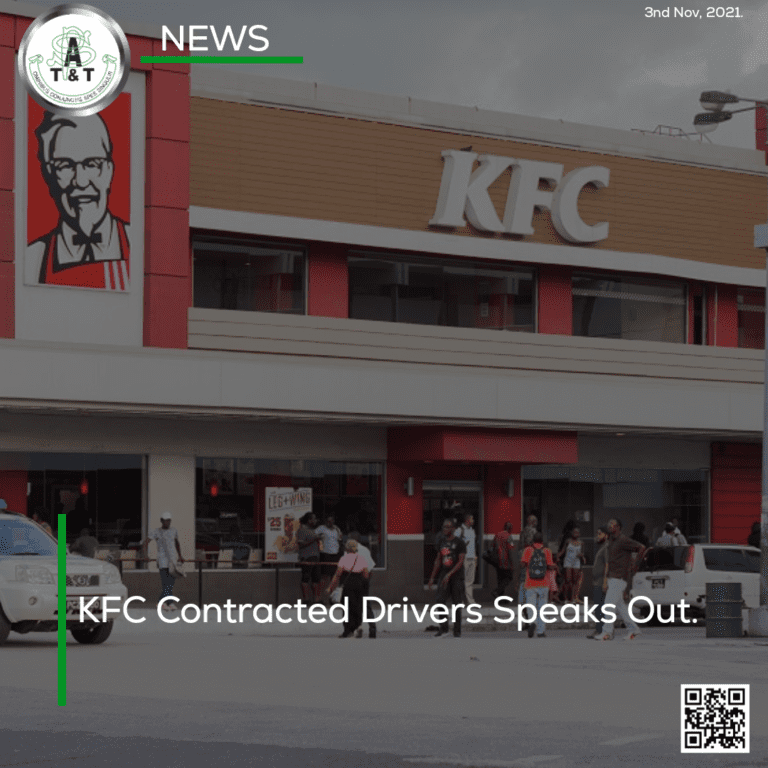 Drivers who work for Kentucky Fried Chicken(KFC) thinks that it is unfair that they are being targeted by their employers although they are doing the same job as motorcycle riders. The only difference they have said is they are contracted workers while the riders are employed by Prestige Holding.

On the issue, PSA media spoke to two drivers who said that they work in East Trinidad and preferred that their names were not published in the story. According to one driver who said that he saw the message on Facebook and not through an official notification, he gave the view that it could be a plot to phase contract drivers out of the establishment since the salary increase does not really make sense.

The other explained that he has worked with KFC for 17 years and this is the first time that their gas allowance has been taken away. According to that driver, last night, he worked and he made six deliveries, he said: “I put my car to work for them for 108 dollars. So, I went and spend from 4pm to 8pm for 108 dollars.”

Both drivers reasoned that before this decision was made a driver would have made 10 dollars per delivery and 20 dollars per hour which was the gas allowance and was paid whether the driver had delivered or not. They stated that riders earned a fixed salary, got paid on delivery and their motorcycles were maintained by the company. They said it was not so with them since they used their own personal vehicles.

In addition, both put forward the claim that on any particular day there are about five motorcycle riders and one driver who are competing for deliveries on a rotation basis that does not really show favoritism to anyone if managed properly.

At least one of the drivers indicated that he is a part-time driver and said that his concern is really for those drivers who work KFC full-time since he has another means of income. He however noted: “There are those who are afraid to speak, then there are others who have said that they are only working out the rest of the week and will eventually leave if nothing changes.” In his point of view, Prestige Holding is trying to cut cost during the pandemic because there is no in-house dining at the establishment presently and it is an economic decision. He also warned other drivers and riders who work at other Prestige Holding companies to take notice as “Today it is us, tomorrow it will be you.” He stated.

Today several KFC delivery drivers planned a protest and about a hundred stayed away from the job after an internal memo had stated a change in salary for contracted drivers. The change however did not affect KFC riders since the delivery rate had been increased from 15 dollars to 20 dollars. According to the memo, the rate of pay for the contracted drivers were also increased from 10 dollars to 18 dollars. However, drivers are lamenting that their 20 dollars per hour gas allowance was scrapped.