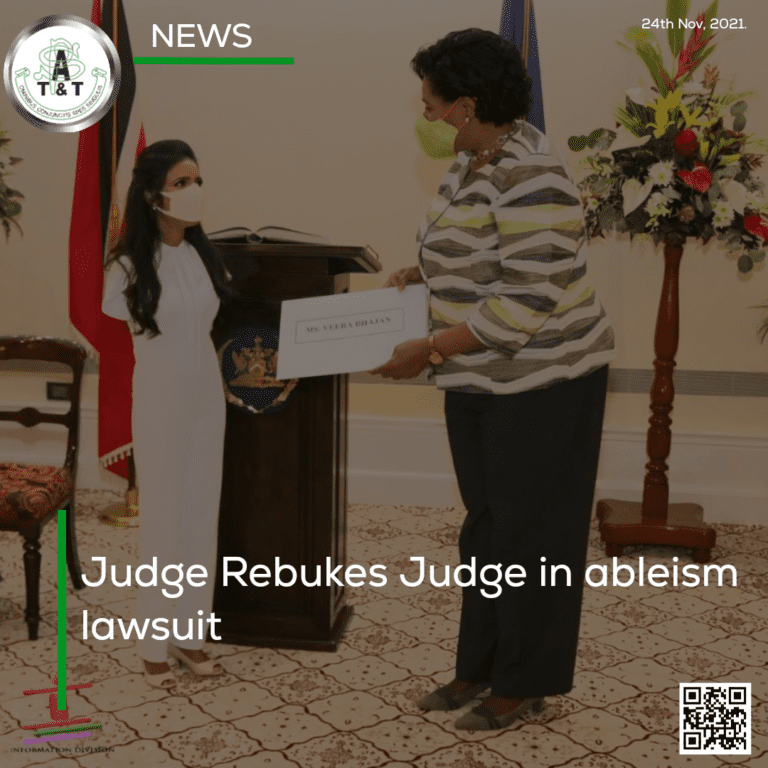 In an ironic twist of fate, the Equal Opportunity Tribunal(EOT) has been found guilty of discrimination, just as president, Paula-Mae Weekes had warned.

Justice Avason Quinlan-Williams handed down the judgement in a trial that she said was inexplicable that it was before a court to decide.

The matter, Justice Quinlan-Williams was referring to was a dispute between lay assessor Veera Bhajan, who was appointed to the position by President, Paula-Mae Weekes on March 17, and the Chairman of the Equal Opportunity Tribunal, who is also a Judge, Madame, Donna Prowell-Raphael.

On July 30, Bhajan issued a pre-action protocol letter to the Attorney General and the chairman of the tribunal judge Donna Prowell-Raphael. According to the letter issued by Bhagan’s attorneys, their client was unable to take up the position that she was appointed to by the president, and her enquiries to get information was treated with “scant disregard.”

At the time, the AG also agreed that Bhajan was entitled to her salary and allowances, even though she had not been able to take up her job, however, on August 26, Prowell-Raphael issued her own correspondence stating that Bhagan’s appointment was ultra vires as she did not meet the requirements as stipulated by the legislation. She said that she intended to challenge the lawsuit and requested that the AG bear the legal costs of a senior counsel to represent the interests of the tribunal.

In an attempt to resolve the stand-off, President, Paula-Mae Weekes wrote to the chairman and stated: “It would be a supreme irony if the tribunal should be accused of ableism or worse,” since Bhagan was born without hands.

In delivering her judgement yesterday, justice Quinlan-Williams granted Bhagan 200,000 dollars for the embarrassment and humiliation she faced over the incident, which will be paid by the tribunal and its chairman. The AG will have to pay 250,000 dollars in vindicatory damages on behalf of the state.  Bhagan was also awarded damages to cover her financial loss from the date of her appointment, all the benefits owed to her as set out in the 100th report of the Salaries Review Commission, and continuing until the end of her three-year term, once she remains in office, as well as interest on these sums.

According to the judge, while coming to her decision was quite easy since the facts and the law were plain, “It was difficult to pen,” because she had to quiet her mind since she kept hearing the song sang by General Grant, “Pure Hate ‘n actin’ Normal.”

She also hoped that the EOT judge would reflect and think if the post of chairman of the Equal Opportunity Tribunal was the best fit for her.

In its defence, the chairman and its tribunal argued that it did not need another lay assessor because it suffered logistical issues and had neither the space nor money to hire another lay person. However, the presided judge, pointed out that the Equal Opportunity Act provides for a chairman and two lay assessors for the tribunal to be lawful.

In a statement after the ruling, the tribunal stated that they had always been guided by best practice and professional advice at all times but stated “The tribunal respects the ruling of the Honourable court and will meet with attorneys to determine its next steps. The tribunal looks forward to continuing to serve the citizens of Trinidad and Tobago.”