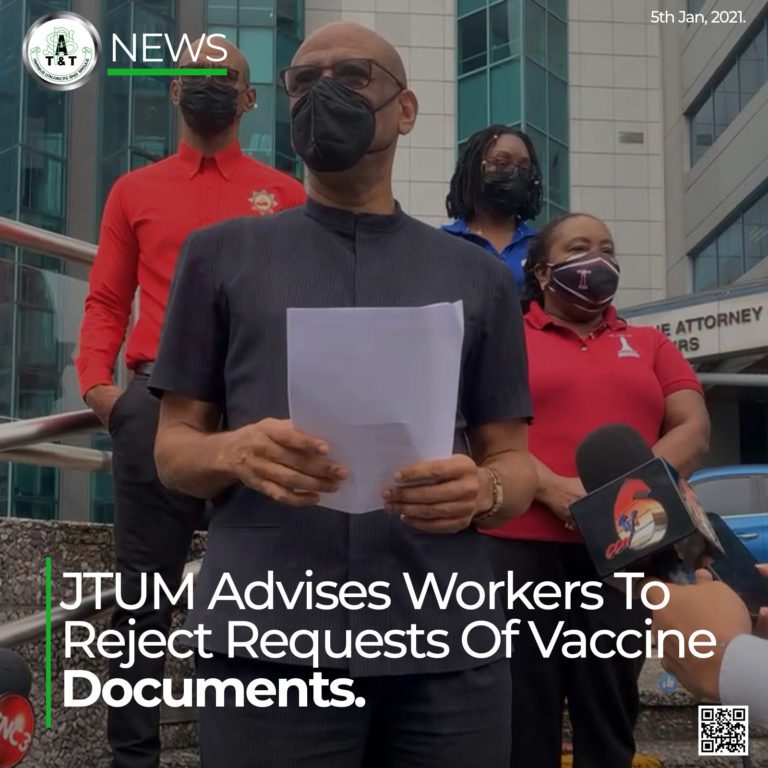 The joint trade union movement on Tuesday advised workers to not submit any vaccine documents to further assist in being sent home when the government’s vaccine mandate comes into effect on January 17th.

The clarion call was made by Head of JTUM Ancel Roget outside the office of the Attorney General on Tuesday as the movement continued its rally against the policy.

With many state agencies such as MTS, T&TEC and SWMCOL already requesting vaccine documents, Roget said this highlights the unilateralism being displayed by the government as discussions are yet to be held.

“It cannot be you would have already made a decision, moving to implement the decision and then call us to say that you had discussions with the trade union movement and that their recommendations are not accepted.”

Roget went on to state,“Different state agencies have been instructed to begin requesting this vaccine information…..and that speaks to the unilateralism of this government in approaching this issue.”

“There’s no requirement in law through the IRA or through your various collective agreements that you must submit to your employer, information on if u are vaccinated or not with regard to covid-19. As workers, you have the right to refuse to give that information to your employers.

Do not contribute to your own demise by giving them information,” he explained.

Roget said this goes for both vaccinated and unvaccinated workers.

For example, in the letter, JTUM asked if Perhaps the government is set to receive international funding and can only do so if certain cohorts of the population is fully vaccinated.

Another was JTUM asking for vaccine expiry dates to be revealed as some claimed that They are in fact close to expiry and the government is rushing to get them into arms.

Roget said that they are yet to receive a response from the Attorney General but on Monday, Al Rawi was reported telling the media that he is still awaiting recommendations and alternatives to the vaccine policy.

In response, Roget continued his call for government to cease and desist on its policy in order to facilitate further discussions.

“It is disingenuous for the Attorney General to make that utterance when in fact we told him that we are willing to have those discussions but to remove that axe over the necks of the working population in this country, to remove that deadline and let us have meaningful discussions.”

The Joint Trade Union Movement made it clear that they are not against vaccination but they are firmly against mandatory vaccination.

Roget added that as uncertainty continues to look the covid-19 virus, the individual’s right to choose should remain. He further advised workers to show up for work on January 17th as the unions and their legal teams are prepared to fight back, once they are barred entry.

“I also want to advise workers to do not be set up. Present yourself to work on the 17th and continue to present yourself for work. Let them deny you entry into your place of work and that will be tantamount to illegal lockout which the trade union movement and the respective unions and our legal teams is awaiting to deal with those issues.”

There has been no word on further meetings with the Attorney General on the matter.