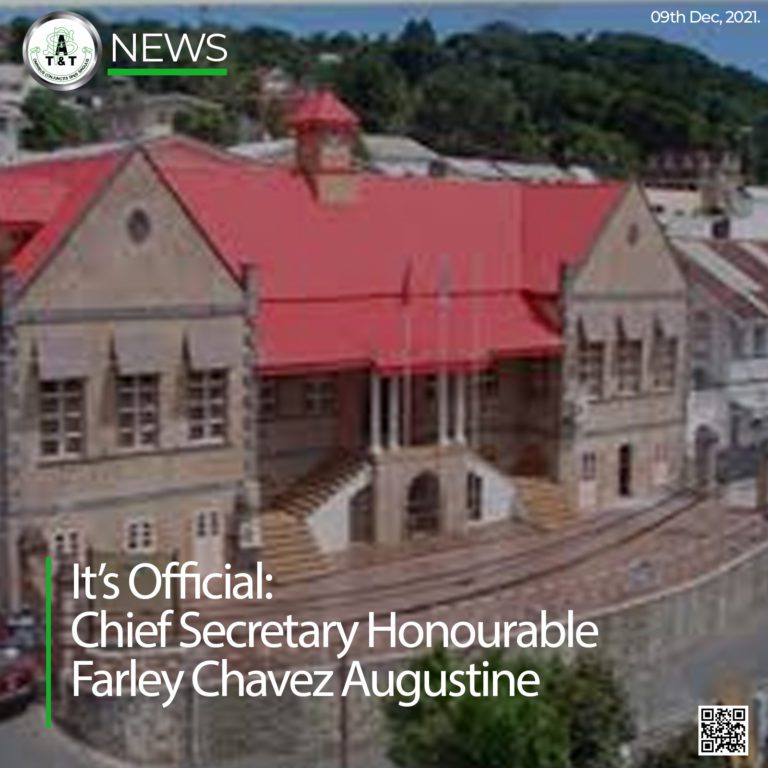 Farley Chavez Augustine has walked out of the Assembly Legislature in Scarborough, Tobago, the official Chief Secretary of the Tobago House of Assembly. He takes over the position from the Peoples National Movement, Ancil Dennis, who lost his deposit in Buccoo/Mt. Pleasant district even after a recount was requested. Overall, the Progressive Democratic Patriots(PDP) scored a decisive victory against the Peoples National Movement(PNM) that ended a 21-year-old reign that the PNM commanded in the Tobago House of Assembly(THA).

The PDP victory ensured that the six-six deadlock that prevented a presiding officer and chief secretary from being chosen among the 12 assemblymen in the January 25 elections did not reoccur. However, to ensure that a deadlock would not have happened again the Election and Boundaries Commission(EBC) had already increased the number of seats from 12 to 15. After the election had ended on Monday and the recounts had been done on Tuesday, it was confirmed that the PDP had won by a landslide 14 seats to one.

In a noticeably reconfigured Assembly chamber owning to the ongoing Covid-19 pandemic presiding officer, Abby Taylor was the first to be sworn in. She was nominated for the position by Augustine and upheld by Dr. Faith BYisrael. Soon thereafter assemblyman and leader of the Progressive Democratic Patriots(PDP), Watson Duke moved the motion to appoint as was expected Farley Augustine as the Chief Secretary. It was seconded by Zorisha Hackett who won her seat and will represent the people of Bethesda/Les Coteaux.

The other PDP positions that were secured today: the deputy chief secretary, which was filled by Duke, and the deputy presiding officer that Joel Sampson was nominated for by BYisrael.

Tashia Burris, a former PDP Tobago West candidate who had lost to Shamja Cudjoe in the last general elections was the first PDP councilor to be sworn in, she was followed by Orlando Kerr and Certica Orr.

On the PNM side, the lone candidate, who won his electoral district and prevented a clean sweep for the PDP even after a recount was requested by the winning team. As the lone PNM candidate to find a win by the narrowest of margins, Kelvon Morris, the representative for the Darrel Spring/Whim district automatically became the minority leader in the Tobago House of Assembly. He has also become the youngest to hold the position. He will be aided by minority counselor, Mrs. Petal Daniel-Benoit.

The last time the PNM had found themselves in a position with just a sole candidate in the Tobago House Assembly was between 1984 and 1996 when two Tobago-based political parties in the Democratic Action Progress(DAC) and the National Alliance for Reconstruction(NAR) had held them at bay. It was not until 2001 under Orville London that the PNM had won the first THA elections 8 seats to the NAR’s 4.

Following in the footsteps of his predecessors Hochoy Charles, Orville London, Kelvin Charles, and Ancil Dennis, Augustine tomorrow will appoint the secretaries of the various divisions. During an interview with reporters outside the Assembly Legislature, before he was sworn in as Chief Secretary today, Augustine was tight-lipped about who would be appointed to certain positions. However, he hinted that a mystery person may surprise some tomorrow and the obvious candidate for, The Division of Health, Wellness, and Family Development, Dr. Faith BYisrael.