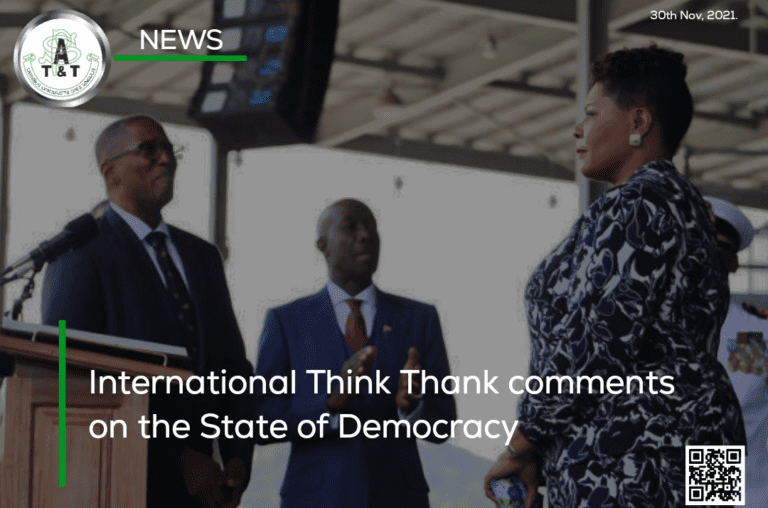 During the Covid-19 pandemic, the International Institute for Democracy and Electoral Assistance (IDEA) has classed Trinidad and Tobago among democracies in the Americas, ‘That has stagnated at a mid-range performance in its Global State of Democracy 2021 report.” The report noted that democracy in general has been suffering since governments have begun adopting several draconian tactics that undermine free speech and weaken the rule of law, exacerbated during the pandemic.

One of the challenges that IDEA underlined was the repeated questioning of the electoral integrity in democracies across the Americas. The report also indicated the numerous attacks on the rule of law in the Americas during the pandemic. It noted that this was achieved through the manipulation of democratic institutions and warned that during a crisis, a strong and healthy democracy needed constant care and attention and even more vigilance.

In Trinidad and Tobago, throughout the pandemic, several complaints have come from a cross-section of the population complaining about the quality of our democracy. During the period of the State of Emergency which began on March 16 until November 17 several trade unions protested in silence that the State of Emergency was enacted to silence the voice of the working class while the government initiated some high-handed actions that they knew was not popular.

One of those actions, the Revenue Authority Bill was pushed through the Parliament minus the special majority clause that was required for its passing on multiple occasions over the past decade. The bill which was dubbed Imbert’s Revenue Authority because of the many number of times that the Finance Minister’s name appeared, seeks to abolish the existing Board of Inland Revenue (BIR) and Customs and Excise Division (CED) and replace it with a TT Revenue Authority (TTRA) to oversee the collection of taxes and management of customs. According to the Opposition Leader, Kamla Persad-Bissessar the bill is an affront and an attack on the country’s constitution.

Then, according to the former Commissioner of Police, Gary Griffith, there was the unmasking of the PNM dictatorship that began with what seemed as political interference at the Police Service Commission (PolSc). The Chairman Bliss Seepersad, the President, and Prime Minister were named having met to determine the appointment and subsequent withdrawal of Gary Griffith as acting CoP. The imbroglio that followed saw the resignation of the members of the PolSC, the Opposition citing interference in what is supposed to be an independent institution, the Prime Minister revealing that he wrote to the Commission stating he lost faith in Mr. Griffith, the appointment of a new PolSC by the President and the revelations of the UNC of potential conflicts of interest of some of the newly appointed members.

In the political arena and in particular, the Tobago House of Assembly (THA), elections was held on January 25 and had taken place without election observers to oversee the process. That was despite the call by the Progressive Democratic Patriots (PDP) political leader, Watson Duke calling on both the President and the Prime Minister to do so. Duke noted at that time that his request was not honoured and he has since written again seeking international observers for the elections on December 6.